This week: Draw a horse, of course. 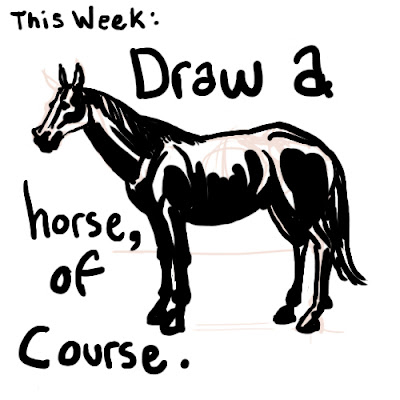 Sorry for the wait! It's been quite a little while since I did one of these anatomy posts and I forgot how much more prep they take. So!

First let me say, the mission statement for this post is NOT to give you all the tools you need to draw a perfect, realistic horse. How many of you draw in perfect photorealism? Basically none, right? So what good does that do? I won't even be giving you an overview of all the major visible muscles like I did with my earlier anatomy posts. Nope, my mission with this post is simple: make it so your horses don't come out like this: 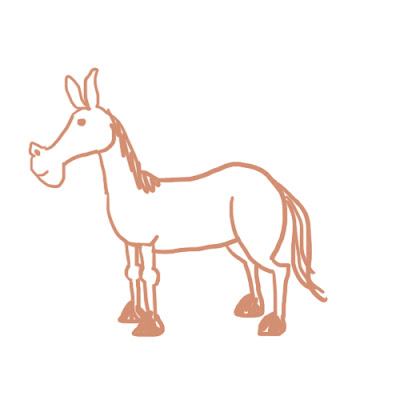 Or like some weird dog thing or whatever. My mission is to give you the tools, in the form of some basic shapes and a little anatomical knowledge, to draw a horse that looks recognizably like a horse, and not a deformed cat, in any position.

I'll start with the skull. Horse skulls seem terribly alien, and they are. They're not like our heads at all. Making them odder still is the fact that while they inform surface anatomy, they don't look like a horse head the way that a skull looks pretty much like a noseless human head. As you know, I loathe basic shapes in drawing books that act only as gestural masses. I favor teaching basic shapes that you can actually build anatomy onto, even hand muscles on if you want to, or that you can use to check the correctness of a drawing you've done quickly. My choice for the horse skull is a sort of a rounded 3-sided pyramid. The back of the skull is a flat , rounded triangle narrower than it is tall. The pyramid, which if stood on it's base would look more like a lopsided Chinese mountain, is tall and leans toward the short edge of the triangular base. The tip is blunt, blunt enough for a set of horse's teeth into. Finally, I like to draw two lines down from the acute angle of the triangle down to the end of the nose, as a visual guide both for the center of the face and to remind me that that part of the horse's nose is very narrow. 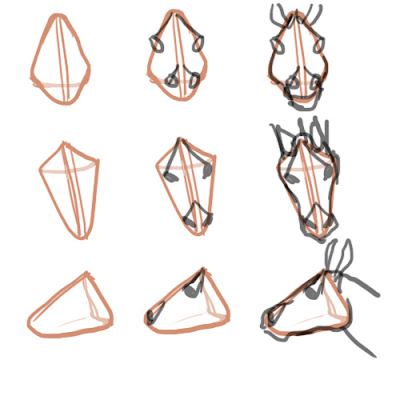 As you can see in the above drawing, my next step is simple: I extend two sets of cones out at a slant from that nasal bridge, which will fill out the structure of the horse's eye sockets and it's nostrils. Just by doing that you have all the structure you need to flesh out the head and alter the shapes as you like for the horse you're drawing. I chose this shape both because you can easily create real anatomy from it, and because it's easy to rotate in space to create hard-to-draw angles.

You can also use this shape to easily draw the skull, which is important to draw if your horse is going to open it's mouth: 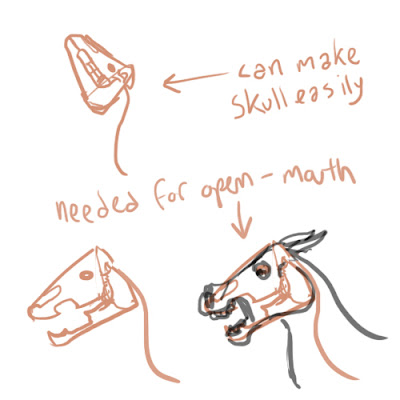 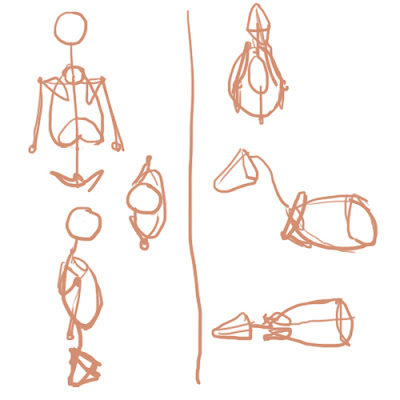 Here's a lovely anatomical illustration to show you what it really looks like: 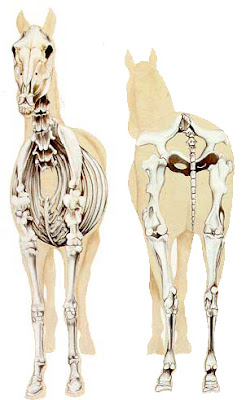 The most alien thing about horse anatomy (and other four legged animals) is the way huge vertebral ridges affect the contour of their back, and in the case of horses, their neck. If you feel your back and neck your spine and beck bones are pretty much near the surface at the back, right? Not so with horses. a huge ridge of vertebral bones between their shoulders (called the withers by horse people) sticks way up from their back, and huge muscles extend from there to the back of the head. This means the neck bones are buried closer to the front of the neck than they are the back. Furthermore, even though the line of a four legged animal's spine is a convex line, the shape formed by this ridge makes a horse's back look like a concave shape. Another ridge of vertebrae, along with the pelvic bones, make the back higher, making the spine seem even more concavely curved. But it's not. 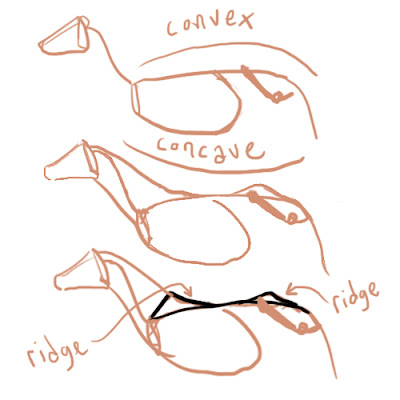 You can see these two ridges VERY clearly in the photo of this horse: 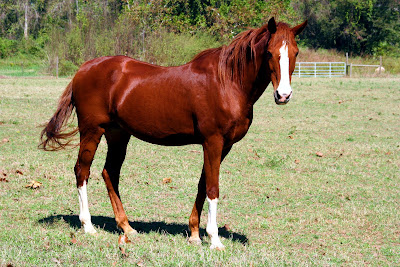 His spine is almost straight in this pose, but it looks bent because of these structures.

Next we'll move on to the pelvis. As you can see, the pelvis is the widest part of a horse: 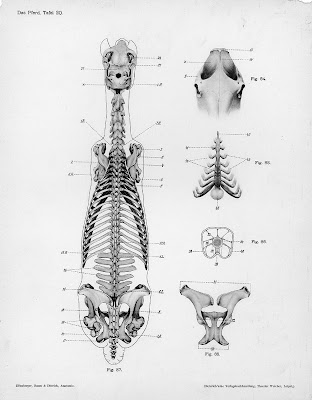 But from the side, the pelvis is so this you can basic shape it as if it were a sheet of cardboard and not lose much accuracy. Which is exactly how I treat it. I draw the pelvis as a triangle of cardboard that's had it's end nipped off, and a fold made in it about 2/3-3/4ths of the way to the narrow side. The two sides of the fold get balls glued on representing the hip sockets. 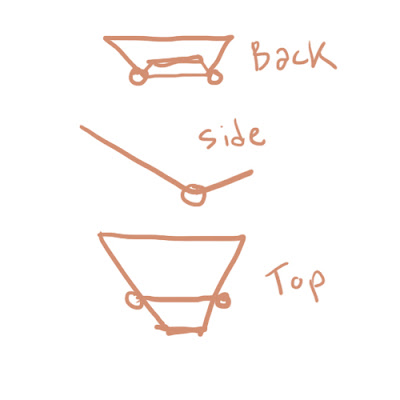 With this shape, you can draw a horse's rear in absolutely any position. Remember that the tail passes under the top of the hips, curves over it, and the tail hangs down past the end, like in the drawing below: 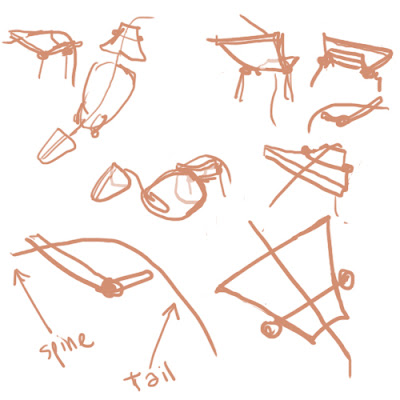 Those are the basic shapes you need for the body. For the legs, well, I can get you started, but those, like human hands, demand study and practice. There's no way around it. It does help to remember what joints on the hose correspond to which joints on a human, however: 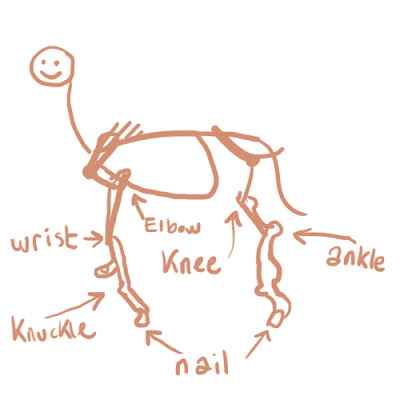 Now let's put these all together. Here's a horse I sketched with these basic shapes: 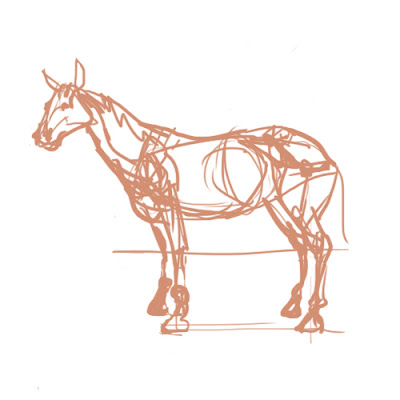 And here's how I drew him, step by step: 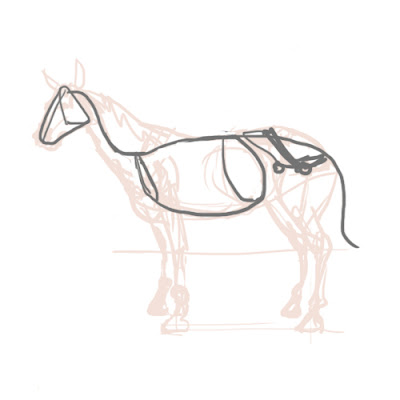 Note that the shoulder blade sweeps way forward an an angle, it doesn't just point down. And the short, stumpy humerus sweeps back an an equally aggressive angle. The elbow does not go below the ribcage pretty much ever, and it can't extend hardly at all. Unless you're drawing a horse in an extreeme position, you should draw the shoulder blade and humerous as if they were an almost immobile, rigid structure. 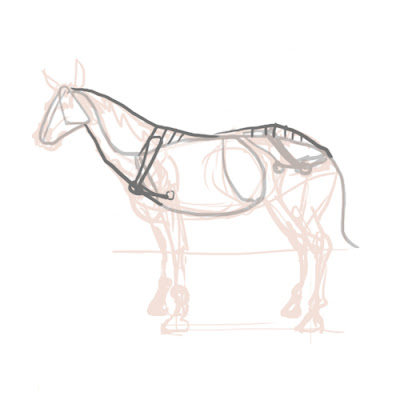 Note how the back of the elbow sticks, way, way up, to give the muscles that will sweep down from the whole shoulder blade a big handle to pull on. You need to draw this so when you draw the huge lump of shoulder muscle it looks basically right. 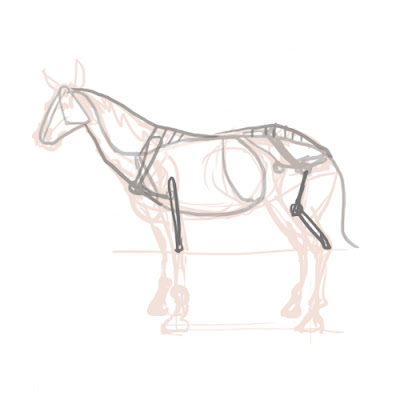 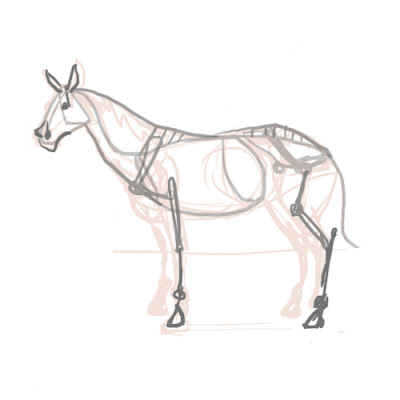 When you fill in the muscles, remember that you know about human anatomy. You know the calf muscles pull on the bottom of the femur, so just draw a line from there to there. You know the quads pull from the top of the pelvis, and the butt muscles from the sides and bottom, so draw lives from there to there. The idea here is not even so much to get exact muscles right, but to make the structure fit together in a way that comes out making sense no matter what lose you're in. If the leg is bent or stretched, the muscles start and end in the same place, so a line drawn between them will pretty much look right. Horses actually have fat little pectoral muscles which make their chests poof out a bit at the base of their necks, so make sure to draw that. Same deal, remember your human anatomy: from the sternum to the humerus, right? Same thing, just no collar bone. 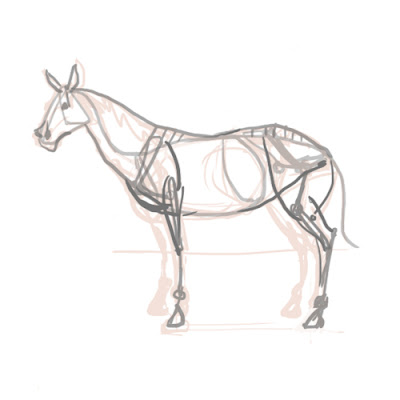 Some really basic proportions will help keep you in check. I hate books that list people's bodies in terms of head measurements, both because the head is round and uneven and there's too many heads to really visually count. I can't picture seven heads very easily and I bet neither can you. But horse heads and nice and big and long and straight, perfect for measuring their own bodies. Here's a diagram, and below some helpful proportions: 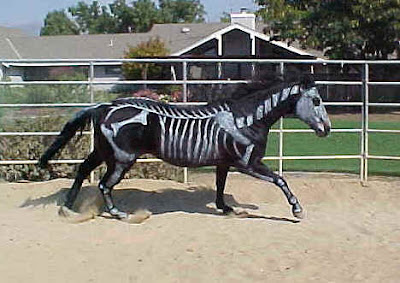 The proportions will vary between breeds of horses, and horses of different ages. Foals have tall skinny legs, draft horses are stockier and stubbier. But these proportions will give you a horse that's basically horse like and not a cow crossed with a kangaroo.

Finally, there's the issue of where to put the horse's legs. Well, that depends on the speed they're going. Again, like with drawing hands, knowing the basic anatomy will help you, but you need to draw them and look at them carefully to get them right. I think the most useful thing is slow motion videos of horses in different gaits. Horses actually change their leg arrangement completely at different speeds, so you need to know how fast you want your horse going before you can figure out what the legs will be doing. Here's some great videos I found at 3 different speeds:

Note that these don't cover fancy military gaits or anything.

Finally, a few details that people often get wrong: 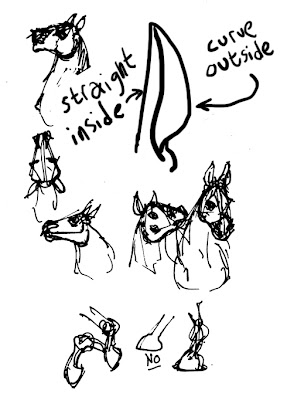 I'll end with a behind the scenes treat, a photo of all the horse drawings I did in research for this post: 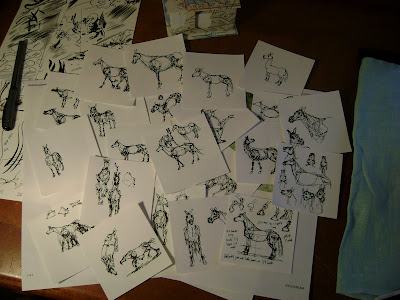 Next week I'll be back to explain dog's legs. Seeya!
Posted by Comic Tools at 4:56 PM

Since you said you haven't gotten feedback on this yet I thought I'd let you know that I definitely bookmarked this and have looked over it multiple times this past week... it is very helpful! Thank you for your great tutorials! :)

Quite a bit of useful anatomical/drawing advice information packed in a single post. Thanks!

You're quite welcome! If you ever end up posting any drawings online that have been helped by Comic Tools, feel free to send me a link and I'll post em', if you like.