This week: Getting the details right

Last week I was reading the new issue of BPRD, and I had an epiphany when I got to this terrifying panel by new series artist James Harren: 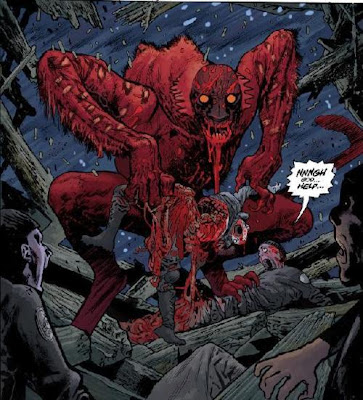 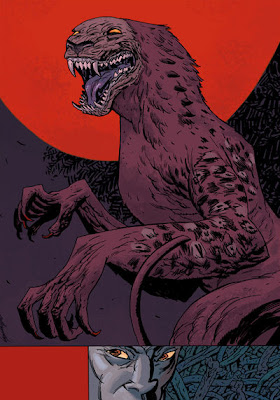 For years now I've been pondering it's hands, and asking myself what made them seem so catlike even though structurally they're human hands. Having to really study paws for last week's entry sowed the seed of the answer in my head, and I knew it as soon as I saw Harren's drawing: its holding invisible paw pads in it's hands.

I mean, I'm sure that's not how Davis or Harren think of it when they draw the creature. Davis probably just intuited the structure of how a cat's paw looks and drew a human hand twisted into that position. But I've tried drawing it myself, and I could never seem to quite get it right. Looked at through the lens of what I learned doing that post however, it's now so clear: the resting position of the creature's hands matches the way an animal's fingers wrap around it's paw pads. Even without the pads there, it looks paw-like. It also looks twisted an horrible- if you try it, you'll see you can't really do that with your fingers, at least not that far back.

That's not all Guy did either. Remember the vertebral ridge that four legged animals have between their shoulder blades? The creature totally has that, and the line of it's neck goes from that ridge to the top of the back of it's skull, just like on a four legged animal. Because it's standing, it gives the were-jaguar a hunched, looming posture. And it's ribcage isn't wide like a human's, it's deep and narrow. These characteristics are what allow the creature to look natural both moving like a humanoid and moving like a cat, while looking like neither. 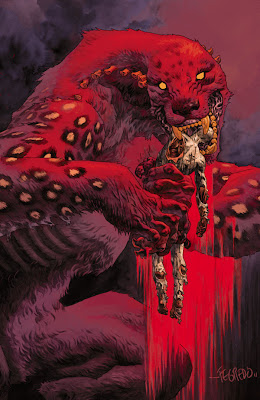 The trick with the hands isn't unique to the were-jaguar. Davis also used it for his design of the Wendigo. Again, look at how it's hands behave like a paw without the pads, allowing it to have both human and animal movements: 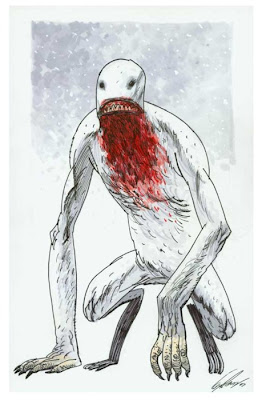 Anatomical details also matter when you're depicting a character who's supposedly an expert at some sort of physical skill, like gymnastics or punching or, as in the following examples, archery.

Archery coach Jim MacOuerrie recently wrote articles about 3 arches appearing in upcoming films: Katniss from The Hunger Games, Merida from Brave, and Hawkeye from The Avengers. Before you go read the articles, before I even say anything, I want you to look at the following two images and register your instant mental impression of which of them looks cooler, and also which looks like the better archer. Do it now. 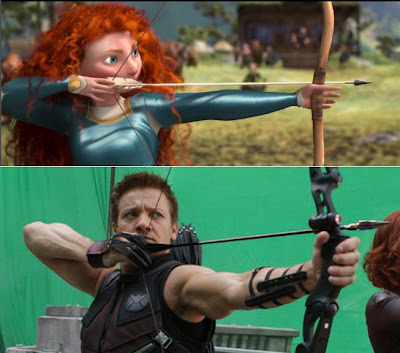 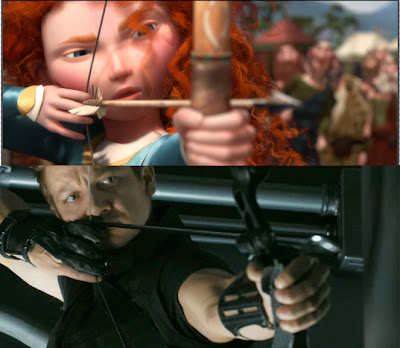 Even those of you who know dick about archery are saying Merida, right? Of course you are. Just because you don't know what good archery form is doesn't mean you still can't see things like tension, lines of force, and form. It's the same reason you might not know what good dancing is, but you know it when you see it. In fact, if you read the articles, the guy playing Hawkeye is making almost every conceivable rookie mistake there is. His form is so bad that he literally could not possibly hit his targets at all. In contrast, Merida and Katniss both have perfect, olympian form. For those of you who don't know, Hawkeye is supposed to be the best archer in the whole universe of some shit like that. And here he is looking less experienced than two ladies, even to the untrained eye. To the trained eye he looks goddamned ridiculous. The author even shows an 11 year old girl looking more cool and athletic than Hawkeye.

That Katniss and Merida have correct form is no accident: The actress playing Katniss studies with an olympic archer, and the Pixar folks did their motherfucking research. With the internet, this is not hard for artists to do. It pays off not just because you'll have the private satisfaction of getting the details right: with physical action, getting the form right makes things look cooler, more badass, more beautiful.


You guys all know how much I love process art, and in searching for images of James harren's work online to find that drawing he did of the Jaguar god, I found some step by step pages on his Deviant Art page. As it turns out, doing BPRD has really forced him to learn as he goes and reassess his drawing process, which he talks about in these two examples:

and here's a newer page.

Look at those panels of Abe fighting that monster. Talk about lines of force!

Finally, I have happy news. The marriage equality comic I posted about last week did even better than it's Kickstarter goal, will will definitely be happening! I don't know if any of you donated, but if you did, you have my thanks.

Seeya next week!
Posted by Comic Tools at 10:49 PM

Thanks for understanding what I was saying and why it matters.

You have a great site here. I'll be back.

WHOA! Hi! Thanks! Not even so much for the compliment (thanks for that too), but for the great articles. I had no idea you were an artist too! I'll post a link to your site when I post about the Beat article.

Katniss doesn't have perfect form, but she's very good. Give her another two years and she could compete on the national level if she wanted. Meanwhile she's good enough to look believable in a movie.

I used to write about archery in comics at the Suspension of Disbelief blog ; if there's anything there that you can use, you're welcome to it.

I'm considering creating an "archery for artists and actors" site, with reference photos and drawings and lots of notes; think anyone would be interested?

Ha, I'd say not many, but you know what my most popular post ever was? The one on fucking ruling pens. It's hard to tell what obscure information people will seek out. But this blog is all about centralizing information for artists, so if you make it, I'll certainly post it.

Absolutely fascinating and informative read. Keep up the fantastic work as always.

Great observations! Harren's BPRD work has been thrilling and schooling me on every page. On the archery note, keep an eye on David Aja's upcoming Hawkeye series. I think the guy's a master page designer but I'd be curious how his shooting form holds up against the others. http://blog.davidaja.com/2012/04/hawkeye.html