This week: The perfect pen? 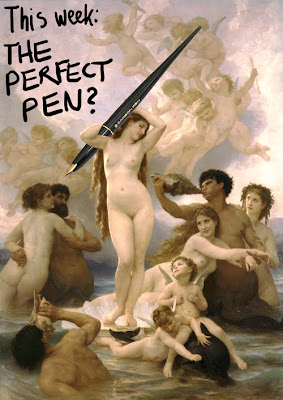 Sarah Glidden says this may be the perfect pen. From her review:

"Well, the search is over. I found the perfect pen. Let me rhapsodize about the Carbon Desk Fountain Pen. I will need no other pen now. Its waterproof, has a fine line, the ink flows perfectly, and it only explodes and gets ink all over my fingers every once in a while."

"...and I did not mention that I found this pen by describing my perfect pen to the guy who works in the pen and ink section of Senellier, the greatest art store in the world, and that, with a twinkle in his eye, he held up the pen and said 'this is what you are looking for.' I took the pen and tried it out on a scrap of paper, mesmerized by the lyricisim of its line. 'Yes, this is exactly what I was looking for!' I exclaimed. I turned around, smiling, to thank him, but there was no one there. 'Maybe it was all a dream," said the pen.'"

I haven't bought and tested the pen yet, but Sarah draws on the go all the time, hopping country to country and drawing prolifically. She's field tested the thing better than I ever would for a review. Waterproof fountain pens aren't just hard to come by, they essentially don't exist. The Japanese were the first to develop pigmented ink ground to finely it wouldn't clog a brush pen, which is why all good brush pens with waterproof fade proof ink are from Japan, and I presume that technology has something to do with the ink in this pen. You canNOT just go shoving regular drawing ink into a fountain pen. Years ago I used a cheap ass, old broken plastic fountain pen for lettering, that I modified to (sort of) allow it to use brush pen cartridges with minimal clogging. It was one of my favorite tools. It did eventually clog, though, and that was that. I wonder if this tool would fit that role? I currently use pointed sticks for lettering, as some of you may recall.


This is a great interview with long time super friend of Comic Tools Brian Lee O'Malley. He's asked how be broke into the business, and he lays out the events of his career from it's very beginning to show that he did not "break into" the biz, but just like everyone else, he built up a body of work over a period of lean, agonizing years, until finally a combination of whim and luck blew a part of the enormous ember he'd created into flame.

"In late 2008 and into 2009 I actually made money off of comics - see, each book comes out and people talk about it and some people heard about it for the first time so they go buy the first book, then if they like it they have to buy the other books. Doing a series adds up over time, if you can keep it up and stay semi-popular. ... There is no advice here, there’s no “breaking in” tips, that’s just how it happened for me. A little bit of talent, a lot of perseverance and hard work, a lot of luck."

In reference to last week's post, boy did this artist ever get the bow form right! And look how badass it looks!


By the way, if you're the sort of person who wastes your employer's time by surfing the web at work and you're mad that I posted an image above that might not be appropriate for the environment where you shouldn't be web surfing in the first place, you should take a look at this post by Warren Ellis, which perfectly captures how I feel about the matter.
Posted by Comic Tools at 10:16 PM