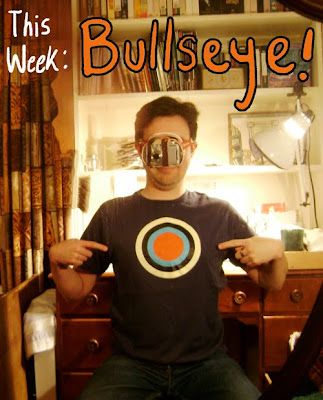 Podcasts are a staple for many cartoonists, whether as a free source of quality media for people who can't pay for cable, or as something to listen to while working. They've also become culturally important. I'd wager that if I made reference to an episode of Savage Love, This American Life, or Radiolab it wouldn't go over too many of your heads. For those of you who do listen to these podcasts, they're likely more than just entertainment for you. You've probably gleaned some real philosophy and life lessons from their content, or heard things that inspired you creatively. Well, for years now the family of podcasts created by Jesse Thorn for MaximumFun.org have been one of the most important cultural parts of my life, perhaps none moreso than Jesse's podcast formerly known as The Sound of Young America, now known as Bullseye.

Since he was 19 at UC Santa Cruz, Jesse has been doing some of THE best interviews I have ever heard in my life. First of all, he interviews people I find interesting- artists, musicians, authors, comics, directors, and yes, cartoonists from time to time. But most important is the kinds of questions he asks and the answers those questions get. Jesse was the first person I have ever heard, in my life, give a non-retarded interview with a rapper. You wouldn't think it to look at him, but Jesse is a walking encyclopedia of rap and hip hop, both musically and historically. So whereas most interviewers would ask something ignorant and wearying like "So your lyrics are really violent. Why is that?" and get a dumb, tired answer like "Yo we jus keepin it real, nowwadimean?", Jesse will be like "When listening to the fifth track of your debut album I couldn't help but be reminded of a Philedelphia based funk group I like, and as it turns out I read that you actually lived in Philly with your aunt for two years when they were playing, and I was wondering if there was any connection there?", to which the rapper would then reply with an extremely interesting story about their family life at the time, what the underground Philly funk scene meant to them as a young man, and what about it influenced them musically.

Jesse asks extremely perceptive, well researched questions about the art people make and how their lives, and the art around them, shaped their art. He likes especially to talk about how and why creators mature, both artistically and as people. Everyone he interviews acts like they've waited their whole lives to be asked questions like this. God knows I'd waited my whole life for someone to ASK questions like this.

All ten years of the show are available, online, for free. The archives are searchable. All the new shows are free, you only need subscribe. Ten years of interviews with the best creators of our time, probably the best interviews they ever gave, free.

And that isn't even to mention all the great comedy podcasts Jesse and his team put out, including Jordan, Jesse, Go!, Judge John Hodgman, and more. Every week I get about 3 hours of new, high quality media, free. And did I mention that it's all made in Jesse's living room? And that it's all paid for by donors?

I am one of those donors, and since this week Jesse is in the second week of his annual pledge drive, I'd like to make you all into donors too.

Here are the episodes he's done with cartoonists, that I can remember:

Give them a listen. And if this show seems worth it to you, if you like it enough to subscribe to it, then please do the right thing and become a donor. You can give as little as two bucks a month, though there are gifts with higher pledge levels. The money goes straight to making shows. They're not NPR produced so there isn't even THAT middleman. I will send a hand written thank you note to any Comic Tools readers who become donors, and I will do a sketch on it if you become a donor over the ten dollar a month level. But really, after listening to these, you'll want to thank me. And Jesse, of course.
Posted by Comic Tools at 7:21 PM

I just started donating this year! I'd always loved TSOYA/Bullseye, but I started to listen to Judge John Hodgman and Jordan, Jesse, Go! a little while ago and now I eagerly await them each week. Just the best to make a commute not awful or to draw to.