This week: Dogs are clenching rocks in their paws. 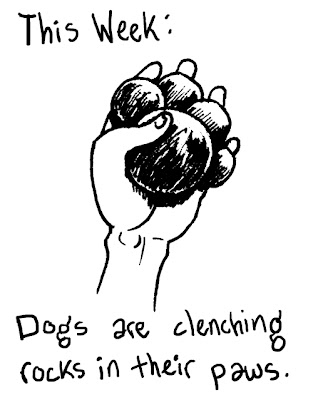 This post was inspired by a tweet by Elanor Davis about 2 weeks back. She tweeted "Before I die I hope I'll be able to draw a dog leg without getting super confused halfway through."

Animals and their weird anatomy can be really hard to draw out of your head, and Elanor's post prompted me to do two posts on hard to draw animal stuff. I decided I should do one on the horse, which was last week's post, because EVERYONE has trouble drawing horses, except a few freaks of nature that leave the rest of us seeing through green lenses. (By the way, was the horses post helpful to anyone the way my people anatomy ones were? Haven't heard any feedback on it yet.) Now this week, this one is dedicated to Elanor.

So, here's a wolf skeleton, the platonic ideal of a dog shape. Compare it to the structure of a horse and you'll see it shares a lot of characteristics, but there are differences too. Just like with the horse the curve of the spine is actually convex but the vertebral ridges make it seem concave. The pelvis is a lot narrower but has a similar structure. The ankles and elbows and lower but the general idea of how they're arranged is similar. And the tall, narrow ribcage and long downswept shoulder blades are almost the same. 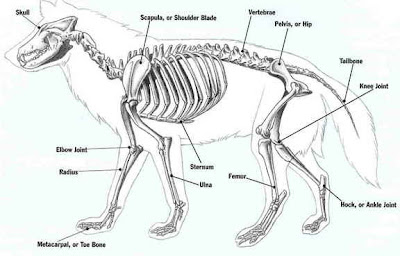 Here's a great illustration of the leg from many angles: 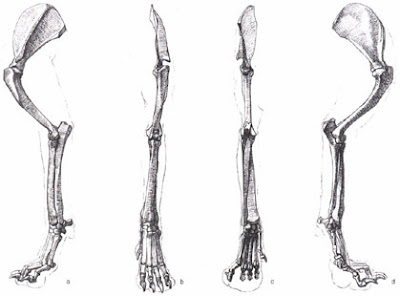 Now, I won't dwell on the body much in terms of shape and proportions, and I'll tell you why in just a bit. But I will say that just like with my horse post, unless you want to draw really realistically, you only need to know where masses of muscle start and end to get the shape of the leg right. Here's the basic shapes of the skeleton: 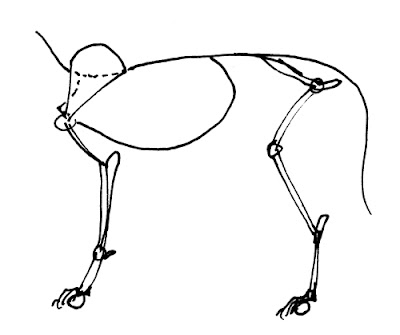 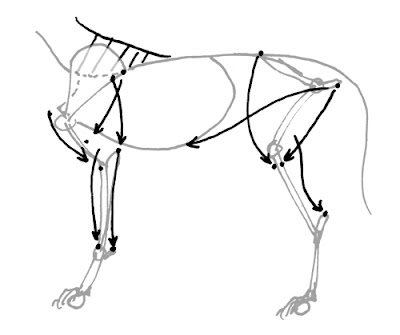 Now, I said I wouldn't get into proportions or shape too much, and here's why: through breeding we've twisted dogs into all sorts or forms. There are no set proportions for a dog. Researching this post I found a great website called skeledog.com that sells t-shirts depicting the skeletons of many popular breeds of dog. Here's a couple examples: 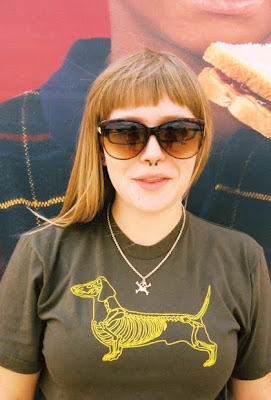 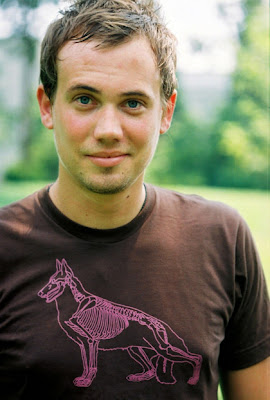 Now, these don't conform to wolf proportions at all, but they do conform to my start and end points. All of them, no matter how weird. Muscles still pull on pretty much the same places, no matter how those places are arranged, or in what animal.

Once you know how to fill in the masses of muscle the tops of the legs are pretty simple. What I think is by far the most confusing bit of a dog are it's paws. There's all these little bumps that look like joints, digits poking out of weird places in the middle of it's leg, it's total mayhem. Sort of like with neck muscles, it's really not so complex, but if you don't know what's underneath it's sort of hard to parse what the hell is going on. So let me offer you a clear, easy to remember description that will aid your memory: dogs are always clenching five rocks in their tiny, withered hands.

Just follow me on this one. Here is a human hand in several poses, and next to it is a dog hand, drawn without it's pads or it's fur: 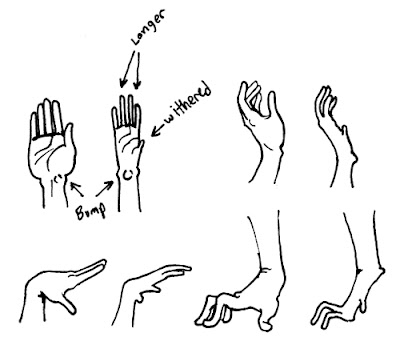 That bump on the wrist is the most obviously different thing from the human hand, but you actually do have it. It's called the pisiform bone, and on dogs and cats is really prominent. The rest of the dog's hand is actually very similar, it just looks withered. The fingers are actually shockingly long and thin, but you can't tell when the pads are on them. I've drawn them straight for simplicity, but they're actually very knobby. 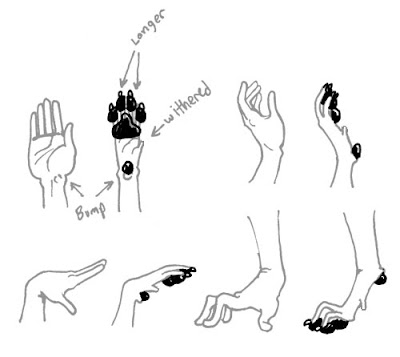 As you can see that brings us most of the way towards the hand becoming a paw right there. Note, even though the pisiform bone sticks out and UP, the top of it is covered by the flesh of the arm, (look back up the the lines you draw for the masses of flesh on the arm, the line goes down from the elbow to the top of the bone) and the pad on it actually points DOWN. The little thumb has no pad on dogs. As for the rest of the fingers, they appear to be ever clutching a handful of little rocks. When the dog stands, it stands on the mounds formed by these pads, as if they were platform shoes.

Here at last is the same drawings with the fur filled in. Now it's a paw, not an exhibit from the Mütter museum. 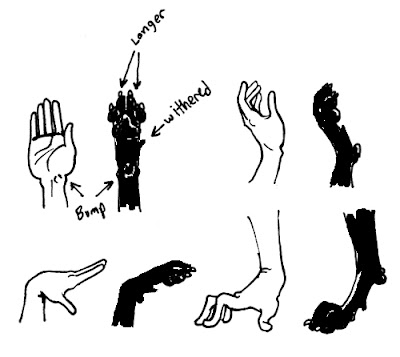 I don't actually recommend drawing paws out like this every time, but thinking of them this way will hopefully keep you from getting confused about all those bumps and sticky out bits on the paw. Remember: dogs are always clutching rocks in their paws.

Let me know if these are actually helpful. See you next week!

Whoa! I had never though of paws that way. Surreal!

Spread the word! Those canines are holding stones in their paws!

SUPER helpful, as always! Thanks!