I really wish it wasn't TMI to describe some of the medical issues I've had this week, because it's been dazzling to see one minor malady lead into another and destroy my productive time so spectacularly.

I've been real behind all winter, as I'm sure you all have noticed. It's not because I'm running out of material either, it's because I used up a lot of my easy quick posts, and most of what I have left on my list are posts that are extremely involved to write, take a lot of research, involve coordinating a lot of interviews, or all 3 at once, in some cases. I see most of you regular readers subscribe or follow with a blog reader, and that's good, because it would drive a person mad to check here all the time.

I think what's realistically gonna happen is probably for another month or two posts will trickle in like they have been, and then there'll be a real busy season for posts this spring and summer, and then after that I WILL have run out of material and things will slow up again. If anyone sends me links or reviews of their own, I will as always link to them.

Right, so I'm off to go sort out my work for this week. If all goes well, I'll see you this coming Saturday! 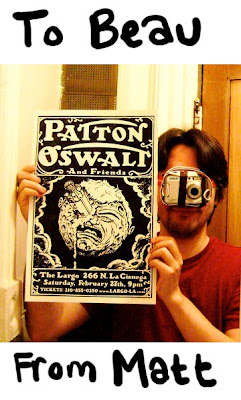 So reader Beau won the contest, which I was hoping would be a time killer to fill a week I knew I'd miss, but then I went and missed another week. Beau, please email me at contact(at)matthew-bernier.com to claim your price, this beautiful archival-quality poster-sized print of my postcard design for Patton Oswalt, printed on Arches hot-press watercolor paper and signed by me. 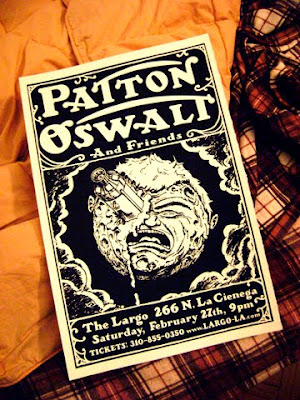 I'm assuming there probably isn't a great deal of demand for them since beau was really the only person who felt like making two lists to get one, but if anyone else wants such a poster, they can write me at the same address. They are $25 plus shipping.

A few folks asked how I was doing- I've recovered from my terrible viral resurgence, and I'm back on my feet. Thanks to everyone who asked.

I have entries coming finally (I spent the last week sending out interview questions to various people I'd been procrastinating about writing), but for this week I have a bunch of neat links:

Remember Sean Murphy, the dude I presented at SCAD with? The harsh Onion's comics reviewer liked the first entry of his new comic with Grant Morrison, Joe the Barbarian, and having seen it in stores, I have to say I do, too! Sean's a crazy-talented inker.

Mark Siegel of First Second books isn't just a great editor, he's a great cartoonist! And he's putting his new book out as a webcomic! It's called Sailor Twain and you should read it.

And Hope Larson is doing a cool educational experiment: 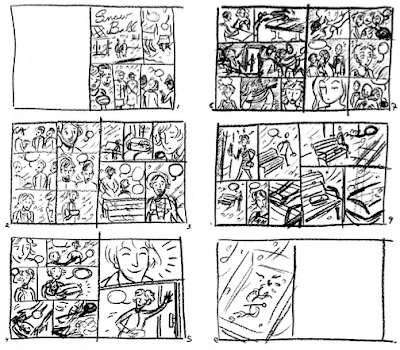 "If you follow me on Twitter, you already know that I'm working on a short comic and posting the process art on Flickr. When it's complete I'll compile the whole thing–script, thumbnails, roughs, inks–into a short comic for print and web. The idea isn't to make a comics how-to, but to show how much work goes into something as basic as a 10-page short story.

It's nerve-wracking to show work to the world when it's vulnerable and new, but that's the whole point. Once I make it through the roughs I'll enlist someone to play editor, make his/her notes public, and address those notes in the final art."