Writing for Comics: An interview with MK Reed 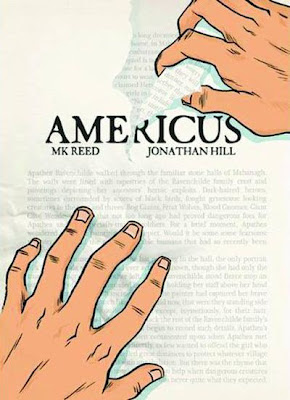 How did you first get interested in writing comics?
I first got into comics by doing stuff for the daily paper at college. Some of the comics in the paper were great, Nicholas Gurewitch, who does the Perry Bible Fellowship, was running his comics in the paper at that time, but there was also a lot of stuff that wasn't so great. I looked at it and thought "I could definitely do that".

Was it gag strips?
Gags, slice of life, serialized stories, there was a crazy range of work. It was like webcomics, only on paper.

And after that, you spent a couple years drawing and self publishing your own work?
Cross Country is the only comic I self published as an actual book. There were also a lot of mini comics, and two longer stories before that that I'm not completely embarrassed to show people now, years later.

How did you transition from writing and drawing to writing comics for other people?
In 2007, after I had started work on Cross Country. My friend and writing partner, Greg Means, wanted a longer story that he could serialize in his magazine, Papercutter. Greg and I threw around a bunch of ideas I was working on at the time, but Americus was kind of a shoe-in from the beginning, since Greg is a librarian, and the story deals with books. It's very library centric. But he knew my time was tied up with working on Cross Country, so he suggested getting another artist involved.  Greg knew Jonathan Hill from around Portland, and when I saw his work I thought, "he's amazing, and we have to get him".

How did it get picked up by First Second?
I knew a few of the people at First Second from the NY comics scene, so I went by their booth at the New York Comic Con, and when I told them I was a writer, they said I should send them something. I submitted the first four chapters of Americus, which had already been drawn, and they were very interested in it from the start.

How do you write your scripts?
I always spend a lot of time working out details before I sit down and do any writing. I start out with a general outline, that includes in all the moments that are important to the story, so I can figure out roughly how long it's going to be. Then I break that outline down into chapters, and the chapters down into pages.
I write everything in Google docs. When I'm working with collaborators, it's easier to have the project online, so that I can be certain everyone has the most recent version. Each script contains dialogue, directions for the acting, and panel descriptions. When I started out with Johnathan I would give him basic page layouts and thumbnails as well, but then he'd come back with something that looked so much better than what I'd come up with, and eventually I just let him work it out on his own. 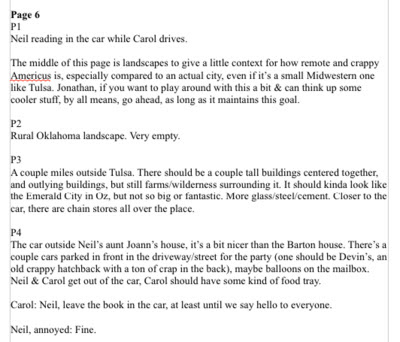 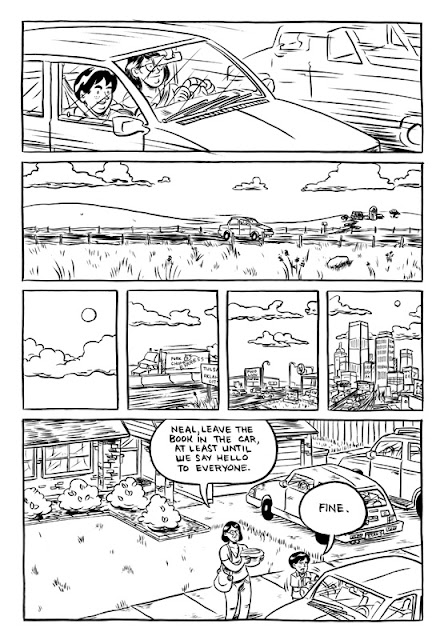 What's different about the way you work when you're writing without a collaborator?
Mainly? It takes me way longer. The nice thing about working with a writing partner is that you have someone to be accountable to, someone to make sure you finish things on time.

Do you miss working on your own comics?
I'm still working on my own side projects. I'm serializing About a Bull, which is set in Ireland. It's going to be really long and it's taking me forever, but it fills my need to draw, and to work on something that's all my own. I have other small projects as well, but I tend to put them on the back burner whenever someone wants to collaborate.

Do you read a lot of prose books, or mostly comics?
I draw inspiration from other comics, but books and movies too. It's helpful to see stories told in different forms, to see different ways of handling common scenarios. Exposing yourself to a broad range of influences is really helpful during the idea phase. But it's really about letting yourself be bored.

How so?
I spend a lot of time in front of books or screens, and on the subway I'll listen to podcasts.  But it's helpful to spend some quite time just thinking about the story. I get a lot of writing done in the shower, It's where all my problems get solved. I can't tell you how many things have clicked together when I stopped paying attention, when I was looking out the window on train rides or car rides. Just being able to let your mind water is an extremely good way to let things come together.

What happens when the artist when they're doing something in a way that wasn't what you envisioned?
I've been pretty lucky in the artists I've worked with, we've been able to talk about things pretty openly. When the drawings aren't right sometimes it's just because I left out some basic information in the script. By the end of Americus, I had a better sense of what I needed to write for Johnathan, so there were fewer corrections.

Can you tell me anything about your upcoming book?
The working tittle is The Cute Girl Network. It's about a girl whose friends are trying to convince her to break up with her boyfriend, who's kind of a dumbass.

And you and Greg are working on that together?
Yes, we finished writing it two years ago, and we've worked on a couple of projects since then. We've finished a second book that Matt Wiegle is drawing. I'm also working with Farel Dalrymple redoing one of my older stories, once he finishes his current project.

How did First Second end up picking up TCGN?
When we were working on Americus they seemed open to doing other projects, and when I sent them the script they really liked it. I've been lucky in that sense.

Any other advice for people who are interested in writing for comics?
Go be social and meet people at conventions. These people will give you feedback, and help build your network. All the opportunities I've gotten have just been from getting to know people in the indie comics scene over the course of several years.

Do you think it's as easy to break into the scene now as it was ten years ago when you were just starting out?
It's easier to break in, but harder to get attention. The scene was much smaller in 2004 than it is now, and there's a new class graduating from SVA every year full of all these amazingly talented kids. When the internet was a smaller place it was easier to get noticed in the webcomics world. But even now, sometimes you just need the right person to mention your blog to their 50,00 followers.

I am happy to find this very useful for me, as it contains lot of information. I always prefer to read the quality content.internet