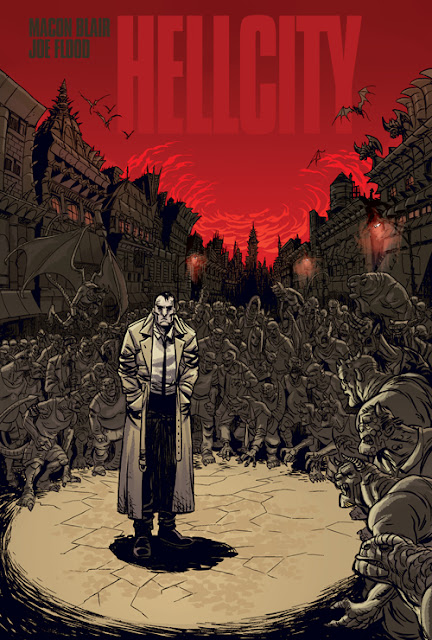 How did you start working on comics?
I went to SVA intending to study painting, but when I got there, I found myself really inspired by the the members of Meathaus, Farel Darymple in particular. They were upperclassmen at the time, and self publishing work that was really different from anything I'd seen before. At the time, I knew nothing about independent publishing, and it was great to see these guys releasing their own work. When I graduated in 2002 I took a full-time job at an art supply store and saved up so I could self-publish my first series, Don't Eat The Electric Sheep. I worked on that for about five years until I switched to longer stories.

Did you know much about indie comics before you came to SVA?
Before? No. My inspiration was all coming from comics like Calvin and Hobbes and the Far Side, Sunday comics page stuff.

No superhero comics at all?
No not really. I had a cousin who read Spawn and The maxx, but I never owned any of the books. I never went to comic stores.

I always kind of took you for an action-indie guy because of the way you draw. The storytelling reminded me so much of stuff like the Ninja Turtles.
I liked the cartoon version of the TMNT, but didn't read the comics until later. I worked at the SVA library, and pretty much read everything in their graphic novel collection. That's when I first saw Tank Girl. The stuff I did with Cricket and Frankie in the sewer came out of a mash-up between Tank Girl and Ninja Turtles.

Tell me about your process, how do you thumbnail?
I thumbnail the whole book in advance, on a templates that I create and print myself. I generally keep a 1/4" margin between the panel border and the cut edge of the page, and I like to take that into consideration when I'm thumbnailing. I do all my work on cheap copy paper, in two page spreads. I work at actual size, so if the final book is 6"x9", the paper I'm thumbnailing on is 12"x9". My thumbs are pretty detailed; my goal is the make my thumbnails so tight you could read them almost as easily as the finished book. Once I'm done, I scan the thumbnails and add text and sound effects in photoshop, then email them to my editor and publisher for revisions. 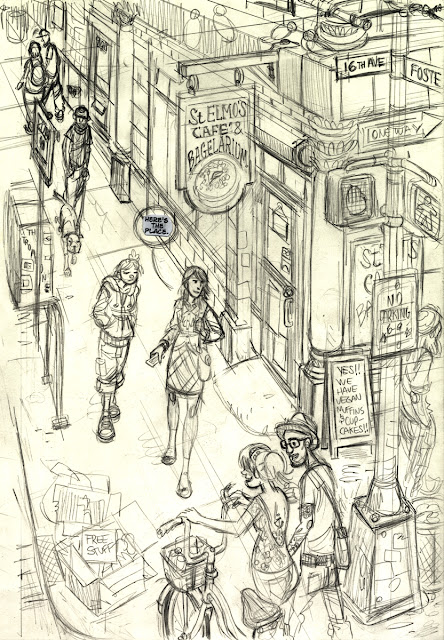 How about pencils?
I work at a larger scale when I'm penciling and inking. I use 15"x20" 2 ply plate Bristol board, the smoothest I can find. I plot out the drawings from the thumbnails almost exactly, two to a page, just like they'll be in the final book. Working this way eliminates surprises. I know that every page turn will be exactly the way I want it to be for the reader.
I use a 7mm HB lead in an Alvin mechanical drafting pencil. I like the 7mm lead because it's nice in-between size, not too think or too thin, and I only use Alvins, because they're indestructible. It's the only type of drafting pencil I've ever owned that's never broken on me. They're made in Germany, and mostly metal. I've stepped on them and had them come out fine. Mechanical pencils are more efficient because you don't have to stop and sharpen them. I like working with wood pencils, but I tend to press to hard with them, which makes it difficult to erase the pencils later. I like the line quality in pencil drawings a lot, but when I'm working, I'm careful not to to fall in love with my pencils, because they're meant to be temporary. Destined to be inked over and erased.

Inks and brushes?
I only use Dr Martens high black star hi carb ink. The high carbon content means it really sticks to the paper when I'm erasing my pencils. Other inks I've used in the past would fade, so that I'd have to go over all the fine lines again. I use Raphael size 1 Kolinsky Sable brushes, which are pretty small, so sometimes I'll use a #2 for larger areas. I also use Tashikawa Spoon Nibs and Crow Quill nibs. It depends on the project. Over the years I've found myself using the brush more and more.


That seems to be an overall trend in comics now.
Well, everyone loves the brush. It's very much in vogue thanks to guys like Paul Pope, Dean Haspiel, trying to bring back that old-school  Jack Kirby style. Craig Thompson too, and Charles Burns, you're seeing brush work everywhere. Primarily, I use Photoshop and a Wacom tablet for coloring. Sometimes is use water color, or, very rarely, gouache. But for the books I'm doing not, at First Second, I work with a professional colorist.

And lettering?
I use a Blambot font called Lint McCreed. They have a ton of free fonts, but I paid for this one, because it looks most like my own handwriting. The $20 fee covers anything I self publish, or publish through an indie publisher. I use the same font at first second, but McMillan, the parent company, pays the additional licensing fee. 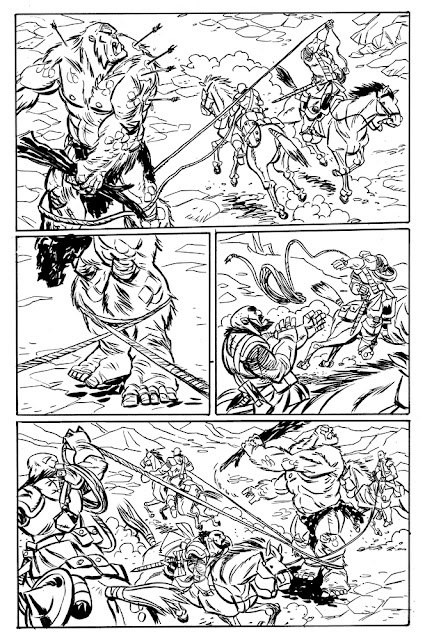 Your process is so involved, what's your time frame like?
It takes about 2-3 months to thumbnail a 150-175 page book, the pencils I do 2-3 pages a day, because that's when I'm really going in and using reference and making sure to get the details right. That part takes about 6 months. Then the inks are done in around 4.

I wanted to talk to you a bit about working with a publisher. You started out writing your own works and self-publishing, do you miss it at all?
No.

The self publishing or the writing?
Both, because I can never finish anything. There's something really great about being handed a story with a beginning, middle and end. weather it's a prose piece or a screenplay, or a comic book script broken down into pages and panels. There's no guesswork. No wondering where the story is going to end. If I have to write something I'll start drawing it as well, I'll jump the gun and draw before I've finished the writing.

You never wrote a script out in advance?
Never. I don't like to type and my handwriting is atrocious.

When you're working on someone else's story, is there a particular format you like best?
They all have their benefits; prose stories have more great descriptive language, which gives me some context and an idea of what the writer was thinking. You have a lot of freedom with a movie script because the rythm of it translates well into page turns, reveals, etc… Working with a comic script is great because so much of the work has been done for you, but it's also a little confining. As a comic artist you are set designer, costumer, makeup, set design, cinematographer. You're in charge of continuity. When you work from a comic script that's already broken down into panels, part of that directorial role has been shifted to someone else. 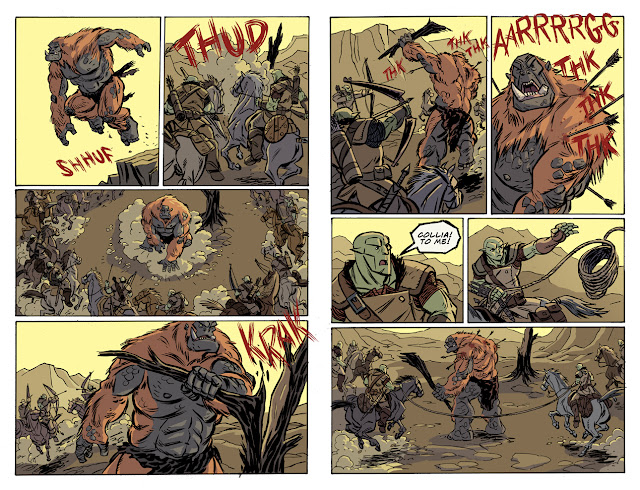 Thanks for sharing Joe!

Hi. I found this site today and I've been going through the whole archive. Best blog on the internet out of all the ones who talk about comics and art supplies. You rock man, keep on doing that. [: