What did you first use when you were making comics?
I grew up in Israel, where I worked with cartoonist Uri Fink. He was a mentor to me, and so I  just used whatever he used at the time - which was Alvin pens for inking, they were pretty awful in retrospect None of it was archival so all of the drawings I have from those days have faded to a gray-brown color. We colored everything with pantone markers.
While serving at the army I started making comics for myself rather than for clients -  and for that I switched to inking with nibs and an inkwell. I switched to brushes when I came to the US and started studying at SVA. Now I use Rosemary Kolinsky's brushes; they've held up really well for me, and I like them far better than the Windsor and Newton 7 series. There wasn't much of a comics community in Israel when I was first learning to draw. I took classes in Israel, but mostly learned from working with Uri, so when I came to the New York I was introduced to a bunch of new ways to work.

Was there a big difference in what supplies were available when you were working in Israel? Is the selection any better now? Or do you bring supplies with you when  you travel?
All the stuff that's available here is available there,  and if it wants you could mail order it or now get it from the internet. It's a matter of knowing what to use that makes the difference. when i travel I usually just take my wacom and ink digitally, since I don't want to carry a jug of ink in the suitcase.

How do you ink your comics now?
I actually don't ink most of my work these days. I use a 0.9 2b lead, the thickest you can get– so the line gets soft, and a bit messy. I end up doing a lot of clean-up afterwards on the computer but I like the look of it. I found that something was lost when I went over the pencils with ink. I preferred the delicate quality of pencil line. This style has worked particularly well for The Abbadon because it has an almost ghostly quality. Nothing looks too permanent. For a long time inking was a product of necessity. In the 30's and 40's, when printing presses were really bad, you needed these thick black lines so that people could see what is going on and the reproduction would be clear. The techniques used to print comics now are much more sophisticated, so I don't think inking is always a must.

And so many people are viewing comics online on high resolution monitors.
That too.

What about thumbnails?
My thumbnails are very loose, and I only make them for next 3-4 pages. And once I've drawn the thumbnails I have to use them right away, because an sometimes even an hour later I don't know what I'm looking at. There will be a circle in a square and that's it. Sometimes I just draw it in as I go, and don't thumbnail at all.

Did you script out the whole story in Advance?
I started with an idea of the plot, a rough script. Working with a project that wasn't completely scripted out in advance means that there have been a lot of small changes over the course of the story. I've been working on it for two years so I've had time to really think about it.
It's such a huge project that I've also had to find ways to keep it interesting for me– there are a lot more naked ladies in part two. I think that's part of why so many people get into comics by drawing superheros, it's fun to draw muscular men and sexy women. But the art is definitely in service to the story in The Abbadon. I recently drew 12 pages of dialogue because that was what was necessary to advance the plot. so the story is still more important than 'drawing something fun'.

Are there any concessions you make to the webcomic format? Anything you change to make it read better from week to week?
Not really. It's not a gag comic, there aren't a lot of little endings. It's a difficult comic to break down, but it's more important to me that the read well when it's all finished. There's an almost entirely black page in part one because it was necessary for the pacing. Sometimes people get angry about stuff like that in the comments.

How about the color?


use watercolor textures in photoshop. Used two color palettes to differentiate between the flashbacks and the main story. I hand-color a lot of my illustrations with water color paints, but for The Abbadon I've needed to streamline the process and maintain a consistent palette, so I use the same background texture for each page - and do a lot of the additional coloring a top of it in Photoshop. 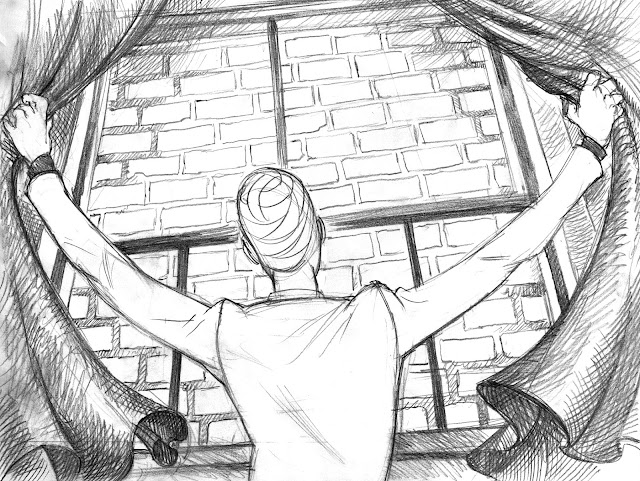 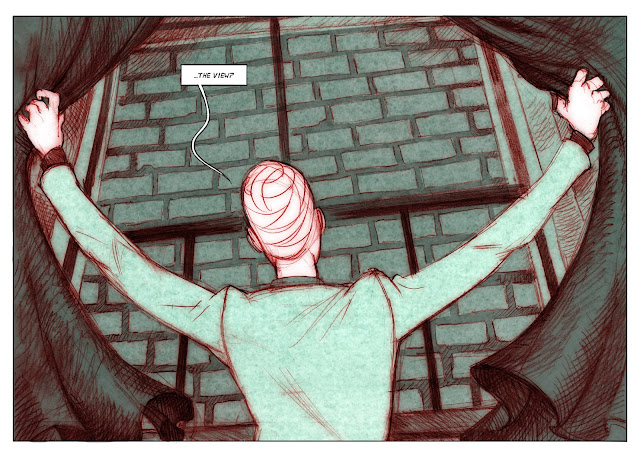