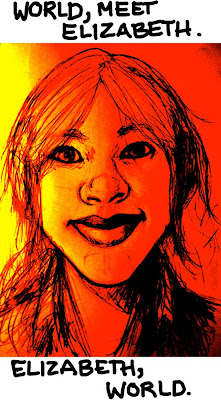 I got the lead holder I ordered, but it shipped from the Czech Republic and arrived a lot later than I thought, so I have not had time to properly test it. So instead I thought I'd share with you a milestone I had this week.

As either a nerd who reads everything too thoroughly and retains everything, or as a stalker compiling facts about my life, you may be aware from past entries that I basically didn't draw anything for almost a year and a half, and that I am nonetheless working on a book written by a friend of mine. I've mostly been doodling and doing character design while my drawing hand slowly regains it's lost abilities and my mind remembers dozens of lost tricks. I've mostly been working on one character, the female lead character, Elizabeth. Some of you have probably had the experience,when designing characters for a story, that there's always at least one character whose likeness escapes you. You can't quite capture their glance, or the line of their jaw. You draw face after face and the expressions on them aren't the expressions your character would make. (By the way, something that goes a long way to solving that, and this is one of those tricks I forgot with disuse, is whenever you draw a character's face, think the thought they're thinking at that moment. Same for the whole pose, actually. Think the thought they're thinking, and your picture will look like a character existing and doing, and not like a posed wax figure.) I had actually captured her general appearance my first time out, in this quick sketch: 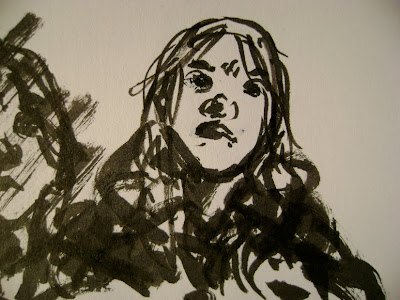 But in this sketch she looks menacing, troubled. And she actually smiles a fair amount in the book. But she's not a character to whom smiling comes easily; it wouldn't be her expression at rest. The other tricky thing about her is, her face is designed around animal features, a reflection of her true nature. And although she'll never look as animal as she does in these sketches, 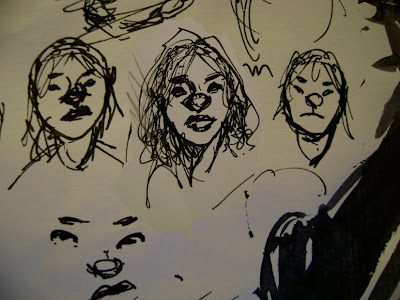 I do want to be able to subtly make her more or less animal in some scenes. All the non human characters will share this general design attribute.

So my quest was, take that first drawing and find out what she'd look like smiling. That proved to be difficult. In the end I'd do 202 drawings, all unsuccessful. Many, like these, looked good as drawings, but simply weren't her: 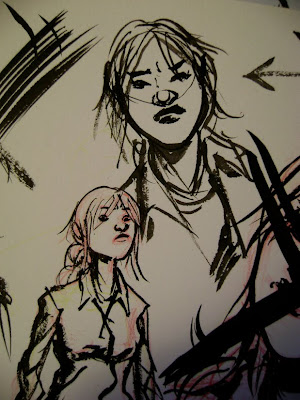 The problem with character design is, you're trying to capture the likeness of someone you've never seen until you draw them. I finally started making small drawings that almost looked like her, like these, 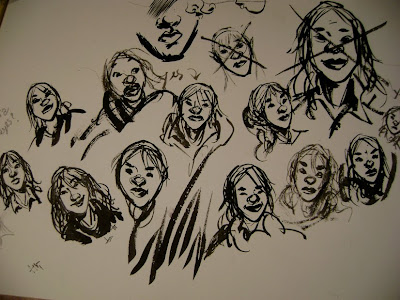 So I decided to go bigger. That led to this drawing. And there Elizabeth was, finally smiling at me: (at Daniel, actually.) 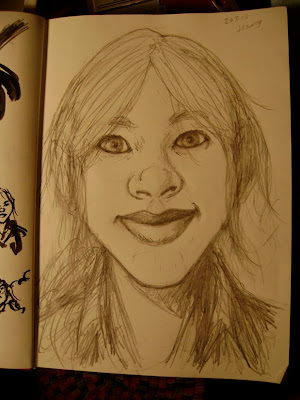 Now, by no means is this a good drawing as a drawing. It's lopsided, fails the mirror test, and is far, far too overwrought. But none of that matters because this isn't a finished drawing, it's a sketch, and it's the sketch in which Elizabeth finally revealed herself. I can now imagine her making any expression at all, striking any pose at all, in the way Elizabeth would and no one else.

I love it when Craig Thompson posts about pages that would have been perfectly good and shows how he pushed them to make them amazing.

I get such a kick out of this drawing by Sam Hiti: 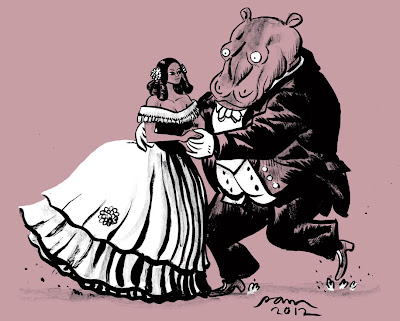 Very nice drawing. Though she doesn't have so-called "classically" beautiful features, she is a cute girl, which is pretty hard to capture. I also like your other try-out sketches...she looks like a human being!

Thanks! She's a rugged lady who spends most of her time hunting. Skinny models would get broken in half like twigs by her lifestyle. Which is fine by me, I find nothing appealing about that kind of woman, and I don't think I could draw a comic where the main character was attracted to someone I found unappealing.

I actually have a habit of making the same facial expression the character I'm drawing is making.
Anyway, I've been reading this for some time now, and it's filled with so much helpful information. I love this blog!

I'm glad you're getting your drawing hand back, reading about how you were in an artistic slump was all too familiar.