This week on Comic Tools: Futzing with nibs

I'm insomniac tonight, so I'll type this sucker up now:

A few weeks ago MK (Remember MK? Started this blog? Wrote the fantastic comic Americus, illustrated by Jonathan Hill, to be published by First Second later this year, which you can now read in webcomic form? That MK.) wrote me with this:

"Hey Matt. So possibly right under your feet all day at work are these scroll nibs, which are usually used for making filials and jazz for fancy calligraphy. Also, at the very bottom, is a thing called a music nib, used for making musical notation lines, it is made by Brause, not Mitchell, so it won't be in the kit. I got mine from scribblers in the UK after seeing them in someone else's catalogue, and I assumed they must be hackable for cartooning short cuts. Double vision, quicker hatching for bgs that must be covered in them, plaid shirts, checkerboards... the list is not gigantic, but you can get some interesting results. I'm not entirely certain that they are in NY Central, but I believe I saw mitchell caligraphy kits hanging over the doorway to the little room the G nibs are stored in, so if you see them, you could probably come up with some ingenious use for them that I am missing. I've used them for a bit of grass in the new comic already, and it was delightful to use something a little different."

She included this photo: 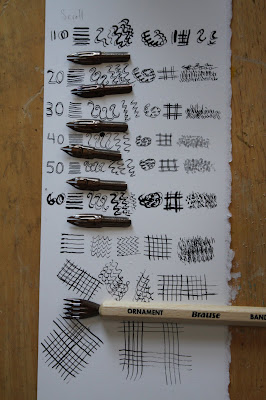 Indeed we do have these nibs downstairs at New York Central. If you walk straight into the store about halfway, you'll see these cheesy looking beige cardboard bubble packets sitting way up high where the managers sit: 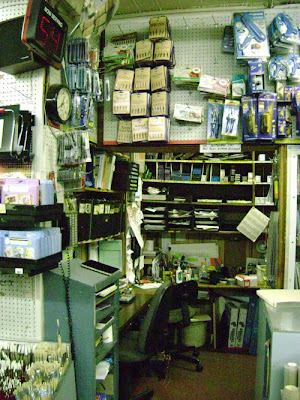 You'll have to ask for someone to help you reach them, unless you're seven feet tall. These are what the packets look like up close, and what they cost: 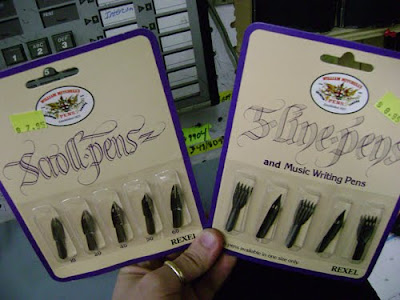 New York Central got the whole lot of them in a buyout of another closing supplier, so once these are gone, they're gone. Fortunately, for anyone who might want them, they don't seem to sell well. Anyhow I've got them back at home now, and I've been playing around with them. I've narrowed it down to 8 that produce various effects I like, and I've been futzing around with them, like MK did. 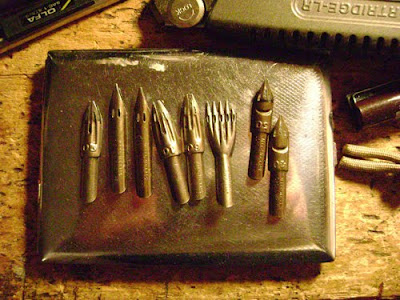 My first impressions are that either these types of nib are either all made of unusually crappy and thin steel, or that the tinyness of the individual nibs having to share the space makes them weak, much like too many babies sharing a womb, or that this particular brand may just be crappy. I don't know, but nonetheless I've found some uses for these that might induce me to buy more anyway. 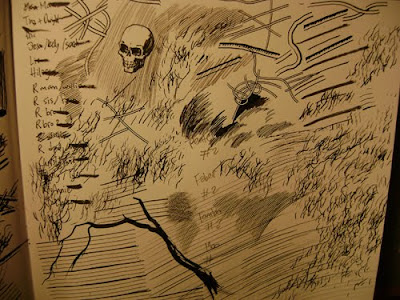 The evenly spaced nibs with one point larger than the other make pleasantly dynamic and perfectly spaced pipes, dowels, poles, and rope. If I wanted to to an entire series of knot-tying illustrations, one of these nibs would very possibly save me from insanity. 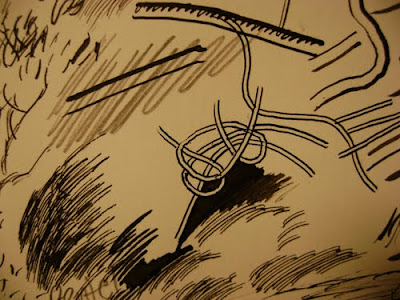 The nibs with multiple slits cut going to the same point hold extra ink like a lettering nib while remaining flexible like a quill, and so far the best use I've found for these are really fantastic willowy tree limbs that you can draw with the line variation of a brush, but with a line quality that is unmistakably of a nib. 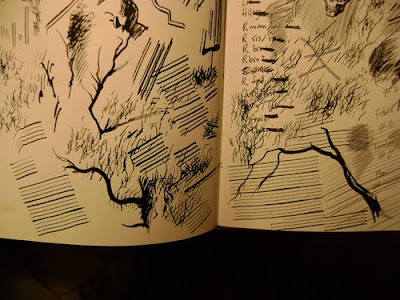 Anyhow, I'm gonna mess around with these some more and then do a proper post on them.

Finally a link: A fantastic interview with Mike Mignola about setting and architecture. One lesson learned: you neither need to like drawing, nor even actually draw, straight lines or perfect perspective in order to draw houses, cities, and other settings in a convincing and lively way. Slanty lines and age are your friends.

Oh my god, I didn't even know something like this existed!

I've been wondering what those scroll nibs were like.

I wonder if soon you'll talk about nibs in their relation to paper? I find they are far less versatile than a brush when it comes to paper compatibility.