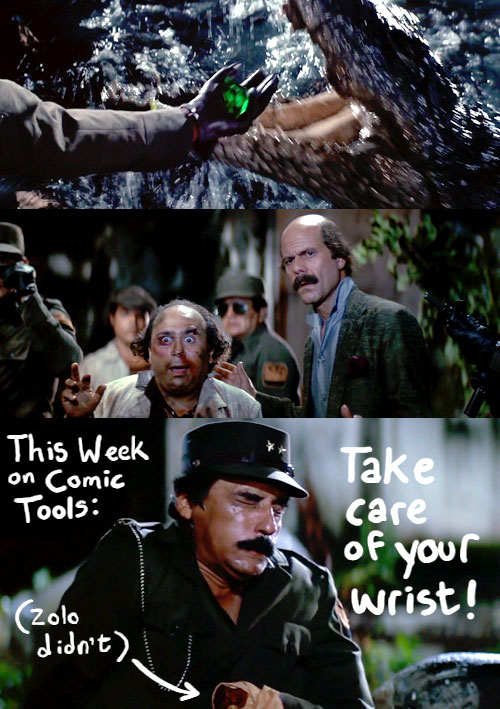 This week on Comic Tools: Take care of your wrist!

Robin Bougie is one of the nicest men I have ever met in comics. Much like the also famously sweet Scott McCloud, he's spends most of his time as a creator helping other creators, publishing their work, using his own prominence to bring good work to light, and talking openly about his experiences as a creator. For years now he's had problems with his drawing hand, as has his wife Rebecca. This is the second time he's posted this video of injury-preventing hand stretches:

When he first posted it I was drawing a lot of comics myself, and getting terrible wrist pain. These stretches helped me a lot. From his post:

Do these stretches before you start, and once an hour, every hour, while drawing. Please don't fuck your shit up like we did. If you're a writer and typing a lot, it couldn't hurt you to do the same.

Think of yourself like an athlete, and for them stretching before they take part in their sport is absolutely VITAL in order to prevent injury. We, as artists, absolutely have to start thinking this way as well -- especially if we're in our thirties or older when our bodies aren't willing to put up with the crap we put them through.

I'm having a lot more trouble staying pain free because I started doing these stretches stuff AFTER I strained my arm, and I know now that it's much better to be preventative and begin doing them before you do permanent damage. LEARN FROM MY MISTAKE!

Your wrist is no less a comic tool than your pen, unless you intend to learn to draw somehow without it. Take care of it. Don't hold El Corazon over crocodile-filled water with your wrist.

By the way, unless you have a really high tolerance for fucked-up, disturbing sexual imagery, do NOT click to see the other entries in his journal. Don't say you weren't warned.

"This has helped me quite a bit. For those that loose faith in humanity...visit Youtube every now and again. The fact that people take time out of their﻿ lives to help people like this is a testament to humanity"

I actually mainly watch youtube videos by people who have taken time and effort to teach others, but it's still odd to me to see someone associate youtube with MORE faith in humanity. Probably because any video, of any thing, will eventually get a comment calling the poster a fag or questioning their skills. This comment made me think that maybe I should focus more on the fact that I've gotten an amazingly thorough education on a few subjects on Youtube, and less on guys in their parent's basement looking for things to call faggy while their tiny penises heal from over masturbating.

Also, in perhaps the biggest Comic Tool news of all time, Jim Woodring will be demonstrating his enormous, 7 foot nib pen. Here's video of the nib:

He's using it in public for the very first time today, and I'll post video of that when it becomes available. I have no idea how the hell this thing is supposed to work, but you can bet I'm drooling to find out and see what he can do with it.

See you all next week!
Posted by Comic Tools at 1:07 PM

Thank you so much for this post - I'm always looking for new stretches to add to my carpal-tunnel prevention routine, haha...

I'm not sure what to think of the crackling noises in both my wrists, but thanks for posting the video. I have another exercise: make 20 large fists and 20 "small fists" (don't know what this is in english, it looks like you are clinging with your fingers to an invisible rope) before drawing - it stretches the fingers and is good against Osteoarthritis