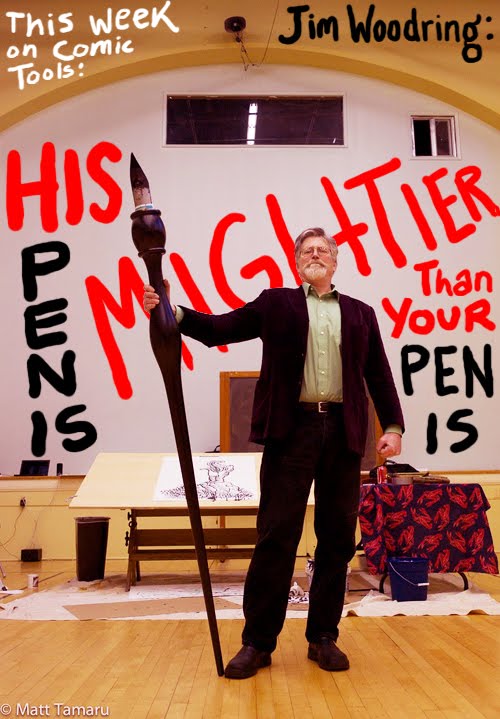 The biggest event in Comic Tools likely to happen this year or any other happened last Sunday, with Jim Woodring exhibiting his enormous pen, it's dripping tip gleaming in the light, to over 100 assembled men, women, and children. Woodring found the 25 pound black wooden shaft awkward and difficult to maneuver, and eventually resorted to just working with the tip, which produced much happier results.

Okay, enough dick innuendo. (Heh, in YOU end-o.) Seriously though, you have no idea how much I wanted to photoshop truck balls onto this thing. Or make a super-nerdy comics in-joke by having the tip going through a slice of pizza.

Dick jokes aside, I really, really love that this thing exists. It's actually really fascinating to me that his learning to use this thing wasn't all that different than the process I go through picking up any ordinary pen.

He had two nibs made, a steel prototype, and then a brass-plated, hand-engraved model, seen here: 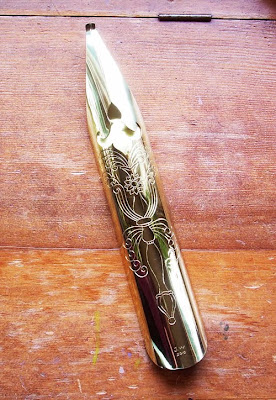 Beautiful, right? But it turned out that that nib was actually a bit too stiff, and the steel nib was more flexible, so Jim put the better looking nib away in favor of the more practical prototype:

(The brass nib in the bucket of shame. click on this image for Glenn Fleichmann's great flickr set of this event.)

This happens to me all the time, when one nib will just be too damned stiff, and I have to chuck it and move on to another one in the box.

Here you can see Jim making the first lines with the stiffer brass nib, and all the dripping and control problems he was having:

At first he was cautiously getting a feel for what marks it could and could not make, and the frist drawing was pretty shabby looking, which always happens to me while learning a new tool.

But amazingly, not too far into the demonstration, Woodring's inking with the pen from Land of the Giants was virtually indistinguishable from his regular inking. Here he is inking a drawing with the Nibbus Maximus:

And at the end of this video you can see him inking with his regular pen:

The man clearly has a feel for the nib as a broad concept, and when you change the parameters, like size, ink thickness, and flexibility, he just has to take awhile to readjust his technique before he's mastered it as he would any other nib. It's way, way more interesting to watch than I thought it would be, and watching him have to struggle to adapt to the tool gave me insights into how any artist adapts to nib pens.

Many have pointed out that new Seattle transplant Scott Kurtz was at the event (as seen in the below photo), and I thought I'd take this opportunity to say what spectacular resources the podcast Webcomics Weekly (which he co-hosts) and accompanying book How to Make Webcomics (which he co-wrote) are. My good friend Erika Moen helped make herself a successful independent artist and businesswoman based on concepts she learned from these resources, and anyone who has a webcomic, are is looking to start a webcomic, would do well to buy the book and start listening to the podcast from episode 1.

Two additional things Woodring posted on his blog that I thought were cool, a guide to how nibs were made in the old days:
(Click to see larger.) 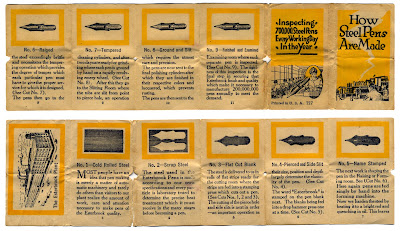 And this drawing of a frog being hit by lightning:
(Click to see larger.) 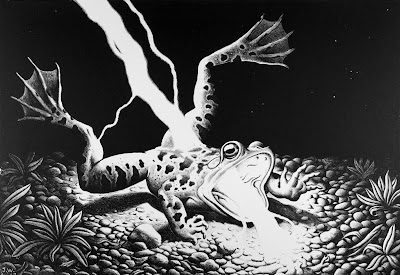 I notice that Wooding is wearing the exact same shirt and suit that he was wearing when I met him at an art opening, and I wonder if he's like me, with only one nice outfit that he just uses over and over at any vaguely fancy event.

In unrelated news, Dark Horse posted this really fantastic back and forth illustrated dialogue between editor Scott Allie and artist Guy Davis on the latest BPRD cover. It's a perfect example of an editor doing their job right, taking an okay idea and molding it into a great one, making the artist look good, and strengthening the narrative impact of the imagery.

Below, a special treat for you: A progression from Guy's thumbnails, to his pencils, to his inks from one of my favorite pages in that issue. Click to see it in all it's glory: 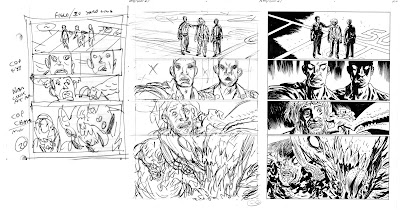 See you next week!

Lotsa action! I was totally on top of whatever giant nib coverage was happening. Did you notice that in that Woodring documentary trailer he's inking with a lettering nib? And he modeled the giant one similarly? It's got the blunted tip and the resevoir.

My only regret is the yellow gymnasium lighting makes it hard to see the lovely violet in that velvet jacket.

I did. It explains how he always gets those thick lines. I've never gotten that kind of variation out of a lettering nib, though, as that's exactly what they're made not to have. That might warrant a Comic Tools entry right there, actually.

From what I've deduced, Jim is actually using the lettering nib almost exclusively on his characters and figures, and then switches to a sharp, flexible drawing nib for his trademark wavy nightmare shading lines. Last I checked he was using one of those Brause nibs that's shaped like a hand with a pointing finger.