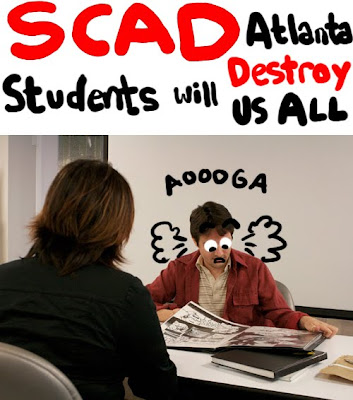 This week: SCAD Atlanta students will destroy us all.

I assume most of you will recognize this episode of the Simpsons: 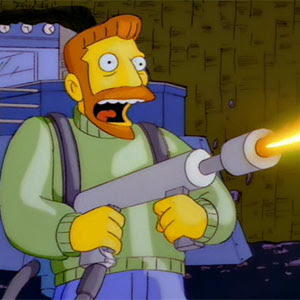 How else do you explain the decor of the place, space-industrial in gaudy colors and exposed metal (And I'm pretty sure this is a transporter facility)? 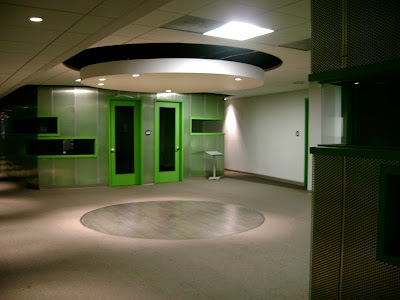 The place has custom-designed recycling bins that match the building! This is the oppressive conformity indicative of a cruel dictator who cannot stand opposition even in his garbage disposal. 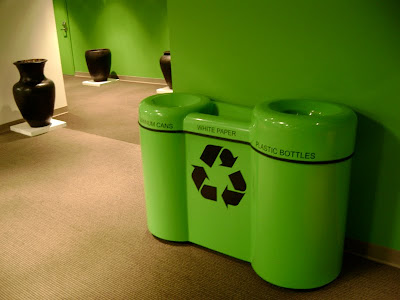 Look at this cafeteria, large enough to feed a small army, with the SCAD logo covering an entire wall, chanting a visual reminder of loyalty unto death. 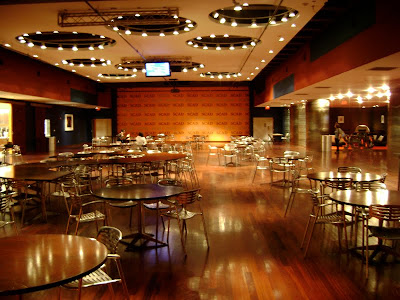 Look at this relaxation area, straight out of a James bond film: 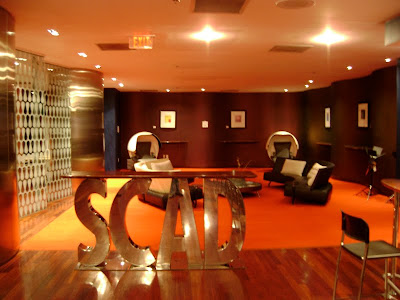 These pod chairs are robotically enhanced: 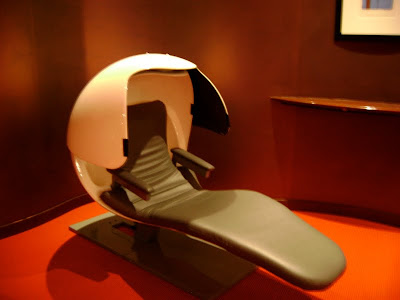 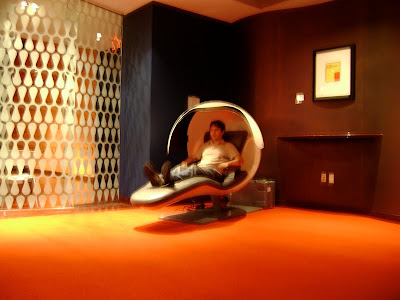 Pull the sensory isolation shield around you, 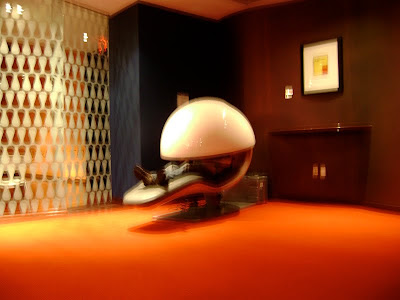 and then invert yourself, immersing yourself into a technological relaxation bubble no doubt filled with ultrasonic subliminal brainwashing messages. Mere students don't require devices like this to relax- only agents of horror, soldiers that have done things which stretch even morally bleached minds to their breaking point, require such mechanically-assisted relaxation to find peace. 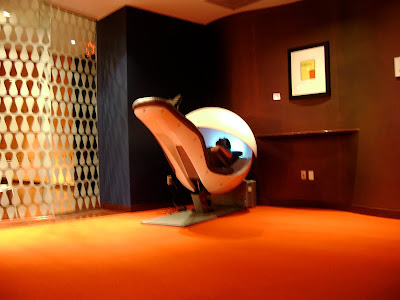 There is a small "theater" which is clearly a single-stage to orbit escape pod for the facility's higher ranking officials, should something go awry: 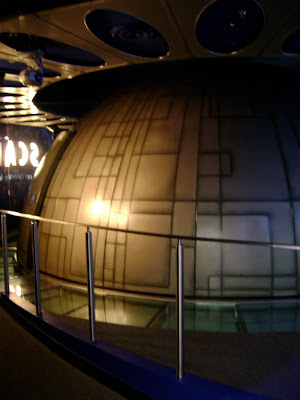 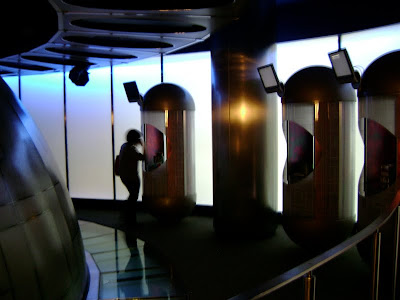 Make no mistake, SCAD Atlanta students will destroy us all.

(SCAD Atlanta's building was originally a huge federal building, following which it was rennovated to the tune of $40 million by a dot-com that promptly went bankrupt upon completion, and now SCAD has a long term lease and the benefit of facilities that were supposed to be for the man-children of a failed Google. I say Man-children because I have never seen a building LESS decorated by women in my entire life. I've been to strip clubs with a more feminine touch.)

Actually, SCAD Atlanta students ARE coming to destroy us all, with their art.

Way back in October I was invited to be one of SCAD Atlanta's two guest speakers, along with Sean Murphy. We both gave a talk about our careers, two lessons with students, and did portfolio reviews. Tim O'Shea did a fan-fucking-tastic job covering it all, in an article that manages to quote myself and several others at length while never taking any of us out of context or ruining a nuanced idea. In fact, as Sean pointed out, Tim made us all seem smarter than we are, if anything.

Tim's article covers pretty much everything about what happened except stuff that was in my internal monologue. The two main themes in my head were

a: I absolutely do not deserve to be a co-equal guest artist discussing my "career" alongside a veteran artist who's been at this more than 3 times as long as I have,

b: I was so, SO glad that the lessons, which were basically "The best of Comic Tools, LIVE!" worked out.

I actually learned several new things from the students during my tools lesson, which I'll be passing along soon (I'm still gathering materials for that), and the students really responded well to the anatomy lesson. It was a lot like this blog, actually: I was mostly teaching stuff, but then they had info I didn't know, and now we'll all be able to have this information.

Regarding a: seriously, this was awkward for me. It's really stretching it to say I've had a "career" in comics at all, frankly. Sean's been a published, deadline-meeting workhorse for like 7 years now. I'm not even through my first book, and I'm WAYYYY over deadline with that. I tried to deal with my inadequacy by taking it-head on, and being as honest as possible. I ended up being a good counterpoint to Sean, as an Indie artist who has made some serious mistakes early on, but with the perspective of an indy artist, which is that I can just move on, keep working, and my peers and even my editors will help steer me back on course. This was in sharp contrast to Sean's sector of the industry, which is much more cut throat. Some of my smaller screw ups could, if made by Sean, have cost him his career in the industry forever, no joke. I don't think I deserved to be speaking next to him, but the two of us did serve to emphasize what a varied industry comics can be, and that was good for the students.

Here's Sean and me speaking: 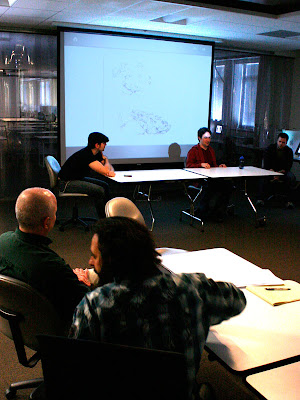 Here's Sean doing his inking tutorial, which I sadly had to miss: 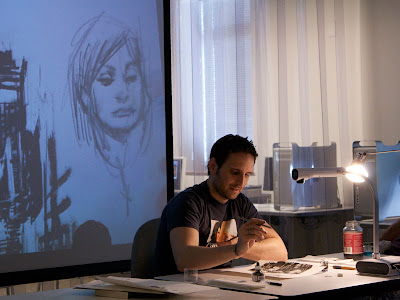 And here's me doing portfolio reviews: 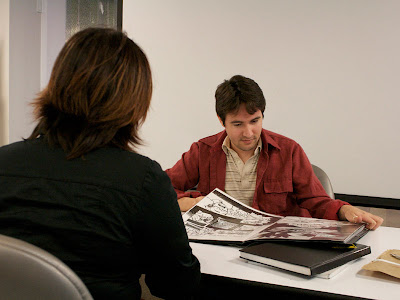 Everyone drawing below the industry top 5%: watch the fuck out. SCAD Atlanta is not like it's retarded cousin SCAD Savannah. As iron sharpens iron, so these artists sharpen each other. This is a school that turns down applicants. This is a school that gives failing grades to unpublishable- emphasis on PUBLISHABLE- work. This is a school that listens to it's teachers, fosters a culture of greatness, and turns out the best students I have ever seen. Several students I met were currently working on books for ONI while still in school. Others had gigs lined up, or were in the process of it. I saw exactly 2 students who weren't ready to work at a totally pro level right then.

Most of them were better than me.

That's not to say there wasn't any one of them I couldn't give a good critique to- everybody has weaknesses. But basically everyone was working close to or at a level indistinguishable from the top 30% of actual pro work. It was a huge change from SVA's huge percentage of mediocrity and borderline-retarded losers being strung along with passing grades for their tuition money. Much is demanded of SCAD students, and as people always do, the students rise to high expectations, enforced with stern grading.

SCAD Atlanta is retarded, RETARDED expensive, but if you can afford it, they are a genuinely great school, with a director and teachers who really have a vision and set of ethics for the place. It was an honor to have been chosen to speak at such a place.

(I'd like to give a special shout-out to Falynn, who toured me around the campus so I could take photos without getting lost and accidentally stumbling into the school's fusion reactor. Here is her livejournal, where you can see her lovely watercolors.)

If SCAD Atlanta ever invites you as a guest, accept. I was fed like Caligula every single day. I'm serious- one night my dinner tab was eighty something, and they didn't flinch. I was put up in a great hotel room. I wanted for nothing, and felt very obligated to give them my all in my presentations. HOSPITALITY, spelled in capital letters, is the legal middle name of everyone there.

I got in a little tourism while I was in Atlanta, which, for the record, is the least pleasant city I have ever been in. New Yorkers, if you want to know what Atlanta is like, imagine if every street in Manhattan were I-95. Now imagine the entire city is like the east side from 23rd to 50th street, but with 5 out of every 6 businesses removed from the street and replaced with parking or windowless concrete walls. Now imagine it's a zombie apocalypse, and you can cover the whole distance from 23rd to 50th and encounter only 4 people. Basically, imagine white plains at night, as an entire city.

BUT, their aquarium has whale sharks, and that redeems their entire shitty awful nightmare city: 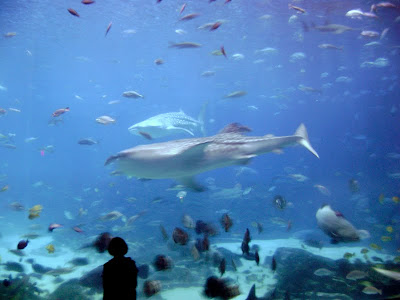 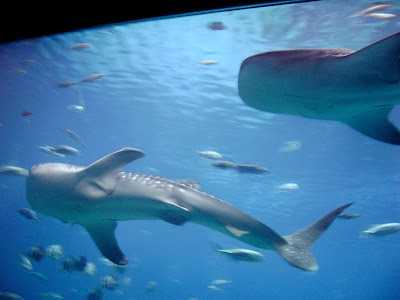 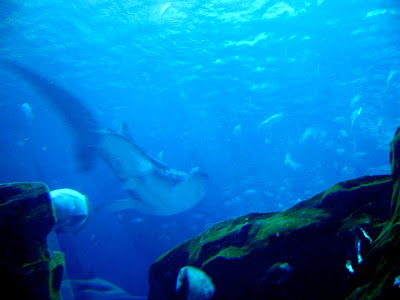 I also went to the Coke museum, which is sort of sad but also sort of cool. They have a room where you can drink Coca Cola products from all over the world, and these were my favorites: 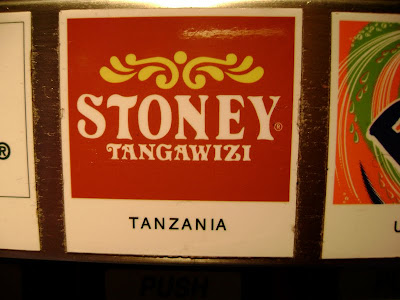 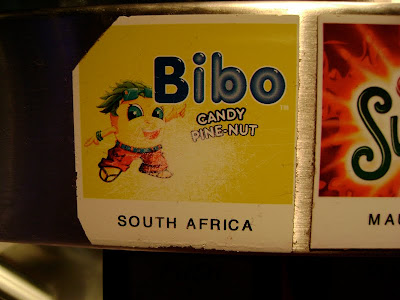 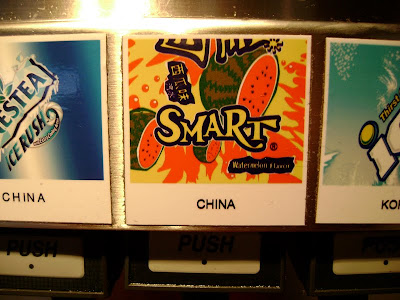 Notably absent was Mexican Coke, which I'm sure they didn't include because if they did nobody would drink the shitty American Coke.

SCAD did me one last great favor, by flying me out to Austin, where I was able to help my girlfriend move out of her apartment and to New York city. That was one of the most important weeks of my life, and it gains importance the farther I go into this relationship. I'll always be grateful to them for making that possible for me. My special thanks go out to Shawn Crystal and Chris Schweizer, who made this happen and treated me so very, very well. Blessings be upon you and your families.

I don't know what next week's lesson will be yet! We shall see...
Posted by Comic Tools at 3:04 AM

"building LESS decorated by women in my entire life"

what are you talking of? that building was SEXY!

(but god is tuition expensive)

Amazing facilities, thanks for the write-up!

I'd love to hear more about the difference between SCAD Savannah and SCAD Atlanta -- I always took Savannah to be the primary campus, and therefore superior in terms of the students' experience. Clearly I was wrong. Unless of course Savannah has a room full of 6-week-old puppies to frolic with, that would be tops.

I've had a chance to visit the Google campus in Mt. View, California and they also have those brain pods. I didn't know the pods get a boner when you climb in though. Pod boners must be part of the complex technology of brainwashing.

Wow. Great post, really loved reading through it. Looking forward to the future posts, as usual!

Also, thanks for the link to falynnk's livejournal, she does indeed have some cool watercolors.

did you happen to note the custom-designed wall paper? that was my favorite part. that and the fact that the exterior of the building hasn't been touched, and still looks like Uncle Sam built it as cheap (and ugly) as possible.

speaking as a former SCAD-Savannah student (i tried to transfer to SCAD-Atlanta but ran out of money) i think the Atlanta campus corrects some serious flaws in the Savannah campus. I'm not saying all art schools have to be IN New York City, but Savannah, GA is a quiet town, and the art community there is solely fueled by SCAD-- which makes for a really ingrown, stagnant art scene. Atlanta makes a lot more sense, imo.

As much as I enjoyed touring the campus with you, I really want to see some of that student work!

Did anyone catch your eye in particular? Any name dropping?

I liked your tour guide's work quite a bit.

To check out student work just go to The Temple of Cartoon Mojo and look at the links under the "members" tab on the top/left of the screen.

If I sat in one of those brain pods I would be constantly worried about my legs.

I'm from Atlanta, so I've had the unfortunate experience of The Coca-Cola Museum. The tasting portion at the end, though, is worth the price of admission. I am a huge fan of disgusting beverages, and they had two of the worst I've ever encountered: Lychee Nut and Bitter Apertif.