I've been away so before I get back to tutorials I'd like to play a little catch-up, as there's been a ton of great stuff accumulating in my links folder over these weeks. I won't even be posting all of it today- I'll be spreading some throughout the week as well.

To start with, this will teach me to sit on a link for too long. The whole main subject of this week's post was going to be all these great cartoonist videos that had been posted, and all of them have since become unavailable online. To start with, you may remember all the videos I linked to in which P. Craig Russell would take one of his comic pages and discuss the composition and storytelling in great depth. Comic Tools reader Chester Kent informed me that those videos had been taken down, but then re-posted , evidently because the website hosting them (and also responsible for producing them) changed it's name from "Lurid TV" to "Wayne Alan Harold Presents. " Chester helpfully provided me with the link, and I tucked it away to post to Comic Tools later.

Well, as it turns out those videos are no longer available online except as a DVD containing all of them, and, if I read the description correctly, other material as well. Here's the cover: 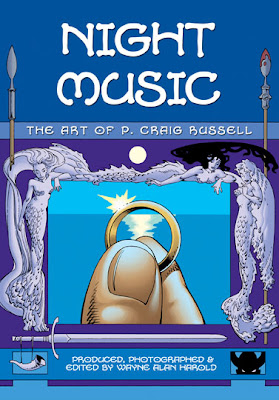 And the description: NIGHT MUSIC: THE ART OF P. CRAIG RUSSELL takes you into this artist’s pro­fes­sional and per­sonal life for an in‐depth look at both his career and his sto­ry­telling tech­niques. You’ll also go behind‐the‐scenes to see Rus­sell hard at work on his comics adap­ta­tion of Neil Gaiman’s SANDMAN: THE DREAM HUNTERS.

I'm sad to see they're no longer available free, but they were certainly some of the best educational content I ever linked to. A commenter to Lucy Knisley's LJ recently asked, regarding Lucy mentioning one of her Center for Cartoon Studies teachers,

"What were you taught? To think in a story arc, to use different inking tools, to vary perspective, to compose in spaces of different sizes? What about cartooning can be turned into a syllabus and assessed in a portfolio evaluation, a graded essay, a set of multiple-choice questions? I hope that you will share an anecdote from cartooning school, one that says -- I was stuck HERE, and then with THIS comment, I was suddenly THERE. With, of course, pictures."
Having gone to school for comics myself and having gotten some use out of it myself, I'd answer with a story of a teacher saying something a lot like the kinds of things P.Craig Russell says every three seconds in these videos. These videos are like a superconcentrated comics course, so the current asking price of 20 bucks does not strike me as high at all. How much did YOU pay for college courses that didn't teach you nearly as much? The answer for me is honestly probably thousands. So, maybe you should get the DVD.

In that same week those videos were (temporarily) re-posted Sam Hiti posted a FANTASTIC video of him inking a free-handed sketch in brush, but it was promotion for his new books- all of which come with an original sketch by Sam inside- and he has since taken it town. I'm actually going to write him and ask super nicely if he would please re-post the video, because I think the fastest way to learn inking is to watch it actually being done, and I think Sam is one of the best inkers out there. (I should mention that Comic Tools reader Looka clued me in to the video even existing.)

But these weeks were not all lost educational opportunity! Quite the contrary!

Matthew Reidsma wrote a fantastic post on why large, vertical, easy-to-read-from-a-distance signs are important for conventions, especially non comics conventions. What makes this piece particularly great is almost less the lesson and more why Matt learned the lesson in the first place. Matt found himself growing dissatisfied with comics conventions because in going to them he only reachs out to people who are already comics fans. So he started attending zine fairs, craft fairs, and other art fairs, and in doing so he found what he was looking for. Reidsma:

"...it's the market I always SAY I am looking for. Comic conventions are full of people who already love comics. You just need to convince them to like yours. Art markets have a wide array of people who may have never read a comic in their lives (except perhas Garfield or Dilbert). Those are the people I want to meet. Because if I can convince those people that comics are worth reading, that's better than selling 5000 comics at SPX or MoCCA. On the business side, one crafter asked me at a show in Indianapolis last month, "Why go to a show where ALL of your competition is in the same room with you?"
One of Reidsma's convention signs: 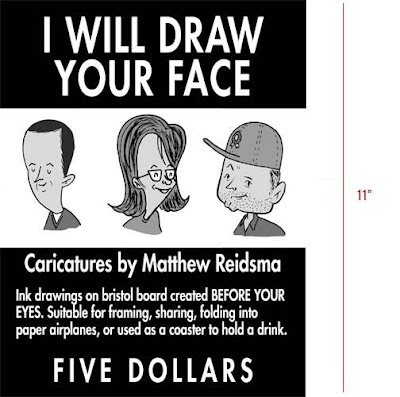 Jillian Tamaki and Yuko Shimizu BOTH posted more fantastic process images from their professional illustration gigs. I will never get tired of either of them. Their names link to their posts rather than just their sites.

Comic Tools reader/ deputized Comic Tools contributor Rivkah has posted the second part of her educational series about print. The small image below links to her post, which in turn links to an image that you can click on to get even larger versions of the panels. She has learned her lesson about working for small computer screens and has resolved to work smaller in future installments. Part one can be seen here. (readers who peruse her blog may note that she also did some ink reviews awhile back- they didn't go unnoticed, but I have an idea for a larger post about ink that they'll be a part of.) 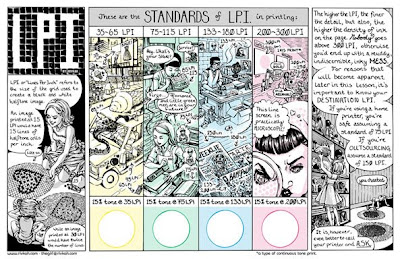 Oh, and this isn't educational, but I'm just saying: My classmate and friend Nicolas Cinquegrani has a new book out. You should buy it. Here's an interview with the writer, Neil Kleid.

Here's where you buy it. 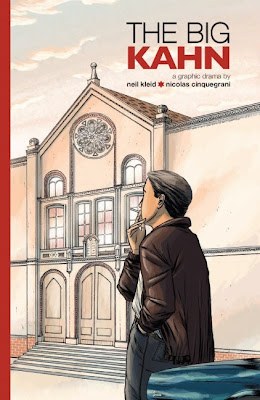 In response to my post "I love my new ink bottle,"

Anton Edmin wrote "Older bottles of Sheaffer 'Skrip' fountain pen ink have a clever little built in inkwell near the lip. These can be bought for next to nix.",

and Westival wrote "I just bought an old glass inkwell on ebay in attempts to solve this problem (among others). I personally only want a small amount of ink out at a given time, as I have already felt the burn of spilling a full bottle of ink onto the carpet. I'll let y'all know how it goes when I receive it."

When I have excess cash lying around I might well check those out. In the meantime I have, as I said in the post, and ink bottle that I love. How are you loving yours, Kiel?

In regard to my post "Don't buy one of these things,"

Steampunkpainter wrote "Thanks, I've been following ever since this was an interview blog, and props to you especially because I was thinking of buying one of those "stay wet" paint palletes, as I work in acrylic gouache and it is a BITCH to keep workable. Now, I needn't worry."

I actually kept that container with the paint in it. There's a tiny bit of mold near the lid but the paint and paper are both still usable, weeks later.

Joey wrote "Good call on the homemade stay-wet tray. I never had any problems with the tray I used in college, but cannot remember the maker. Anyhow.
As I read this I kept coming across the word guache in your post. What you are referring to is gouache.
guache = lacking social experience or grace.

Actually, we're both wrong. Gauche = lacking social experience or grace, Gouache is the paint, and Guache isn't anything. I have corrected the misspellings, thank you for pointing them out! (Blogger spell check recognizes none of them, by the way.)

In response to my post "Tiny little metal ball,"

JoBi wrote "I'm doing an experiment. Bought two pens. I emptied one cartridge and filled it with plain Talens india ink. Did it more than six months ago (I don use it every day) and still no clogs, no problems."

I shall have to try this!

Thanks to all of you! I'll see you next week with a lesson on word Balloons!

Now I have four Platinum brush pens for more experiments. With gray ink and different dilutions of gray/blak ink.

By the way, did you noticed that a normal plastic syringe fits tightly on the cartridges so you can load/unload them easily?

Howdy! Thanks for following up on my comment about the inkwell.

I have only had 2-3 sessions with the inkwell, but here's what I've noticed thus far:

1. I am now in complete control of how deep I'm dipping my brush/nib. Problem solved.

2. It will not be useable for the transportation of ink on account of it's lid not being airtight. So I will need to make sure I pour the contents back into the original ink bottle after each session if I plan to be mobile. This means I also have to carry both items. So I recommend it for those with an established workspace.

3. I believe I can leave ink in the well for as long as I want so long as I stretch some plastic wrap over the inkwell and close it's lid over the wrap. This also protects the cats from drinking it and dying/gaining superpowers.

4. If I could make the perfect inkwell It would be a heavy glass cube with a 0.375" x 0.5" well and an airtight screw-on cap. I was shopping on a low budget, but I believe such a thing exists as I've described.

Kiel: regarding the report, thanks very much, I'll post the update later. As for #4, let me know if you find such a creature.