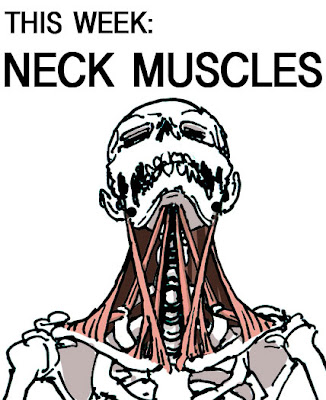 
It's not hard to see why the neck freaks so many people out. You look at it with the skin on and it's hard to see what's going on. Then you look at an anatomy diagram and you see what looks like dozens of tiny muscles in layers crisscrossing every which way, and you like eating the end of a shotgun.

The problem with looking at an anatomy text to see what's going on with the neck is that anatomy texts are there to each you anatomy, but they aren't prioritized for the artist, who more than likely just wants to know what muscle they're looking at, or trying to get those slanty lines in the neck right.

To actually draw a neck, any neck, you only need to know five muscles.

If you're drawing more than five visible neck muscles, you're not drawing a human being. Seriously. ("But Matt, what about when I flex my neck and make all those muscles pop out? There's more than five of those!" No there actually aren't, but I'll explain later why it looks like there is.)

First, here's our plain skeleton. You'll note he has ears, and dots behind his ears (not on the jawbone, but in this drawing the jawbone covers up where they'd actually be.) Those are there to show where some of the muscles insert. 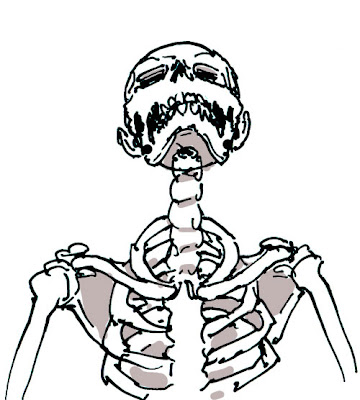 That tube in back of the muscles in the picture below is your windpipe. The cartilage of the trachea is larger and sticks out more in men than in women, although there are freakish examples like Ann Coulter. (No matter what I say, I cannot convince my mother that she actually is, and has always been, a biological woman.) 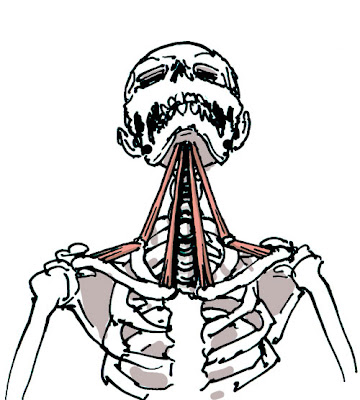 3rd and 4th muscles: you all recognise trapezius, right? Trapezius covers up a looooooooooot of muscles underneath it, making them pretty much invisible and making this lesson much shorter. Also, see how there's not really anything in front of either side of it? That gap that's left is actually a prominent feature of the neck and shoulder area, and you can actually see it in all the photos below that accompany the illustrations. The muscle that has two forks coming up from the sternumm and collar bone and reaching up behind the ear is sternocleidomastoid (say that 3 times fast), the most prominent and most often mis-drawn muscle when people draw necks. A lot of folks draw a slanty line in the neck not knowing where it comes from or where it's going to. 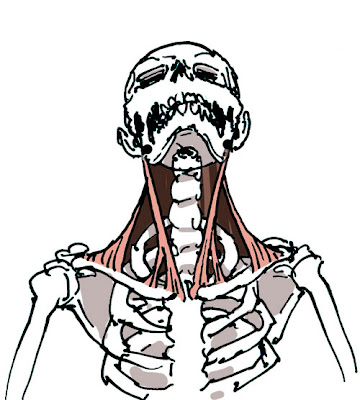 Here's a good picture of the sternocleidomastoids from the side: 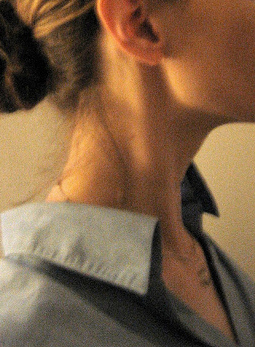 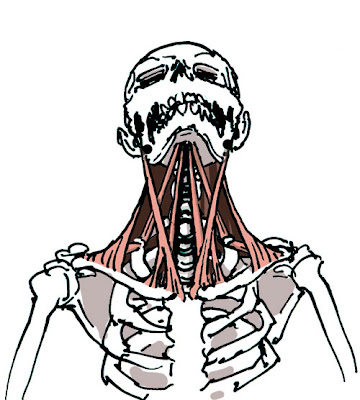 In this fetching photo of my friend Hilary Florido, you can see all of these muscles clearly. Look closely and you can actually see where her omohyoid muscle bends into her top rib: 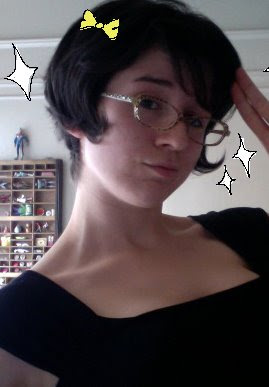 The fifth and last muscles you need to know to draw the neck is platysma, a thin muscle that makes up the front of your neck. It's the muscle that sticks out and makes all those strainy lines when you try to make your "neck muscles" pop out. What looks like a lot of muscles is actually just the fibers of this one muscle.

Try not to overuse this one superhero artists, okay? Pay attention and you'll notice that even if you're straining or yelling you don't flex this muscle very often at all. Only in certain kinds of grimaces and yells. 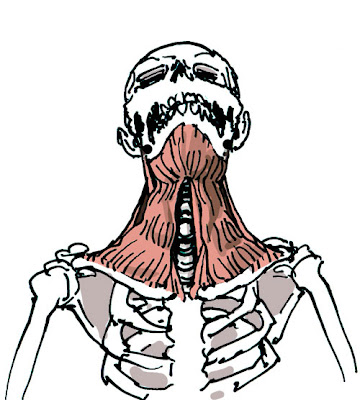 Here's someone flexing their platysma: 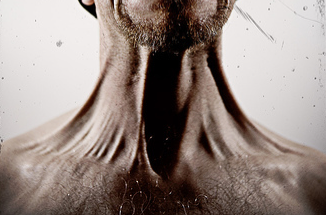 Also for the superhero folk, note that platysma lays on either side of the trachia but not actually over it, and that it DOES NOT CIRCLE ALL THE WAY AROUND THE NECK, no matter what Rob Liefeld says. See how it only goes back so far? Yeah, keep that in mind, will you, superhero artists drawing necks?

You'd think that the neck muscles would stick out more in musclebound folk, but the opposite is actually the case: skinny people tend to have strand-like, very clear neck muscles whereas bulk tens to obscure them, as in this example: 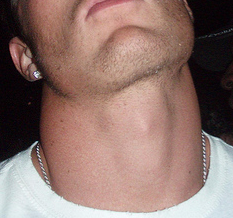 Looks like he's hiding a pineapple in there, doesn't he?

Okay, now, in the comments section a reader was begging me for a hand tutorial.

But there's no point in me doing one, because MAD cartoonist Tom Richmond already did a tutorial on hands that's better than the one I might have done by like a million billion times.

Tom has several other really intensive tutorials on his site, which can all be found at this link: http://www.tomrichmond.com/blog/tag/tutorial/ I'm gonna make that link a part of this blog's sidebar, too, it's such a great resource.

This is the last of my entries on anatomy for cartoonists, and I leave you with some hands drawn by Farel Darymple, who draws some of my favorite hands of anybody, ever: (click on them to read the comic they're from) 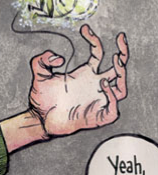 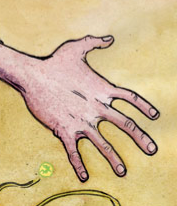 Next week: I'll actually be away at a funeral, but I have something up my sleeve that I've been saving for a rainy day.
Posted by Comic Tools at 2:15 AM

Thanks for all these tuts, Matt. I think I speak for everyone when I say we appreciate all the time you put into them.

I have been studying anatomy , these photos help me to understand the form and composition of muscles and bones!you'll note he has ears, and dots behind his ears (not on the jawbone, but in this drawing???