This week: The forearm

The forearm is an awful thing for the cartoonist who never learned anatomy really well and one day decides they want to draw an arm realistically. It's awful because it looks kind of okay almost no matter how wrong you get it. Unlike the back or upper arms, which look anywhere from awkward to painfully deformed if you don't know what you're doing, you can literally draw everything n the exact opposite place of where it's supposed to be in the forearms and still have it come out looking okay enough you might never know it was wrong.

Which, um, is kind of what I used to do. More recently than I'd care to admit.

I used to often draw my arms this way: 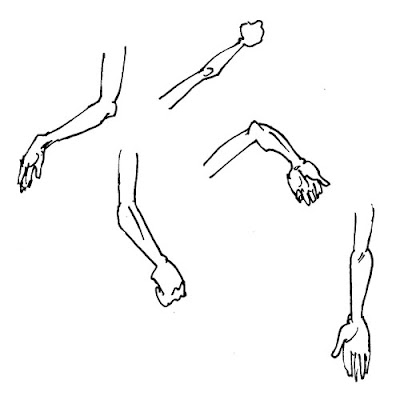 By the end of this lesson you'll see why those are all totally wrong, if you can't tell already.

So, the reason I never learned the forearm for so long was ,it just looks fucking complicated, doesn't it? All these tiny muscles and tendons going this way and that, who can remember all those?

Well, you don't actually have to know them all, unless you're planning on drawing a character with no skin in a realistic style. All you really need to know are 2 muscles (which you draw as one most of the time) and that the skin sticks close to the Ulna, and that's it.

Here's the two muscles you need to know: 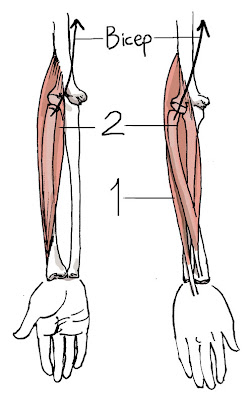 You don't need to know their names, although I'll tell you that 1 is your extensor carpi radialis longus, and 2 is your brachioradialis. They make up that bulge of flesh that slants across your arm and elbow and pretty much defines the from of your whole arm from over the elbow to the wrist.

Here they are in an actual body: 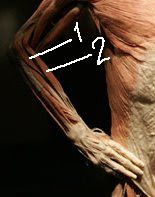 Bear in mind they're thin and dehydrated in this plastinated body.

The other structure you need to know is the patch of facsia that holds the skin close to the ulna, which is the arm bone that doesn't rotate around and makes up the pointy part of your elbow and the sticky-out part of your wrist. It looks like this: 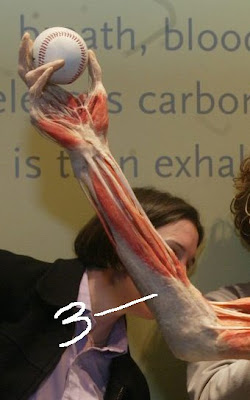 This line not only shows where the bone will always be close to the skin (feel on yourself, it runs all the way down), it represents the separation of the packets of muscles that yanks your hand and fingers up or open and the packet that hanks them down or closed.

Those packets can be thought of as just that- two packs that you slip into the arm to fill it out and pretty much forget about unless you're drawing detailed muscle men. Like this: (animated)

The only visible features, even in fairly buff people, is going to be the 3 things I'm teaching you here.

(A note for the Rob Liefeld types, though: the forearm may look complicated, but it does not have an infinite amount of randomly placed muscles arranged like a lumpy teardrop. You have four fingers and a thumb and there are 2 tendons to pull each open and shut, plus a few other tendons that do some other stuff, and that's it. If you can see more than 20 muscles something is seriously wrong with your character. Even on very strong and cut bodybuilders it should really be more like 10 or less visible. And that's assuming someone with NO body fat at all.)

So let's look at how these affect your arm's shape:

First of all, 1 and 2 form a bulge coming from above the elbow on the back of the arm and twisting down to the wrist near the thumb. The bulge gets pretty big and distinctive as the muscles get bent like a garden hose.


On the right you can see the line leading from the elbow to the non-thumb side of the wrist. That's number 3, indicating where the ulna stays close to the skin.

On the left you can see how 1 and 2 form the slant of the wrinkle in your elbow. In fact, with the bicep that runs underneath them to connect with the ulna, they form the crook of your elbow. Feel your flexed elbow you you'll feel 1 and 2 on one side of the nook and your bicep on the other.

On the right, you can see how 1 and 2 twist as you turn your palm down. 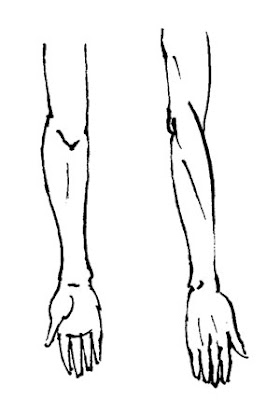 Here you can see how 1 and 2 form the often confusing shape of the back of the elbow. The elbow, when the erm is extended, is defined by the bulge these form as they pass over, to the side, and then down from the elbow joint. The elbow joint itself is just a knob tha pokes out- all the complexity of the shadows of the elbow comes from these (and sometimes other) muscles running around it.

Note on the right how 3 forms a strong line when the arm is twisted, causing the flesh to twist and bulge over the close-to-the-skin bone. 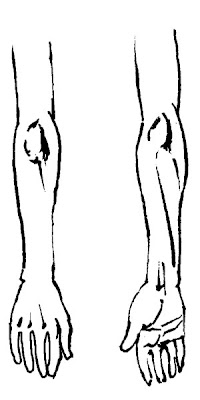 My forearm is one of the only parts of me that's very well developed at all, so here are some photos I took to show you how these things look outside of a drawing: 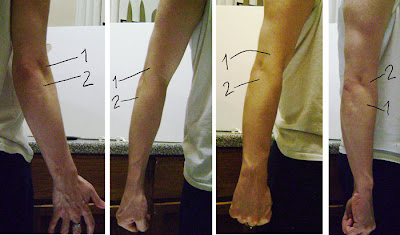 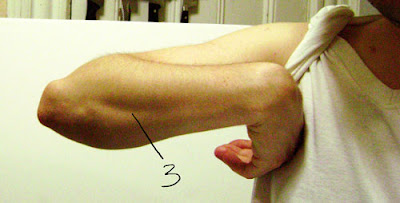 If you understand these 3 defining features, you can draw very accurate and natural looking forearms on characters of any muscle mass or build. These features are visible on the very fat and very thin, and they look almost identical on all body types, on men and women. Draw them large to make someone seem brawny, make the bulges bulgier but the forms more obscured for a fat person, make all the shapes delicate and don't draw almost any internal lines for a wispy person.

Now go back to the top and look at those arms I used to draw again. Yeah, NOW you see it.

Next week: The legs
Posted by Comic Tools at 1:22 AM

One important thing about the forearm : given the shape of the bones, and the way they move around one another, there is now way in hell you could fit 3 long metal claws in there.