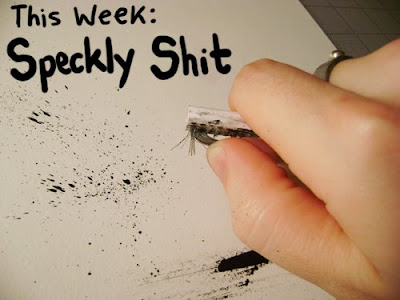 By reader request this week: how to do that speckly shit you sometimes see in comics, usually being used as blood or as a background texture.

The most common tool for producing this effect is a toothbrush. 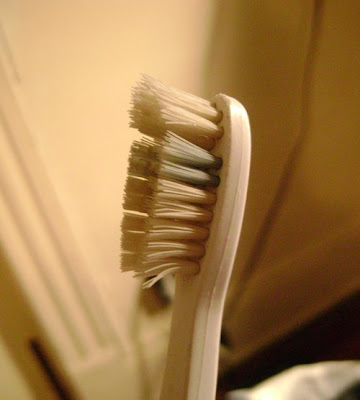 While you can just dip the whole toothbrush in your ink and go to town, I find that using a whole brush is messy, hard to control, and difficult to dip in the ink. So I cut mine down first.

I like to take my brush and cut off all the bristles except the blue ones. That's two rows worth, for those of you who don't use Oral-B brushes. 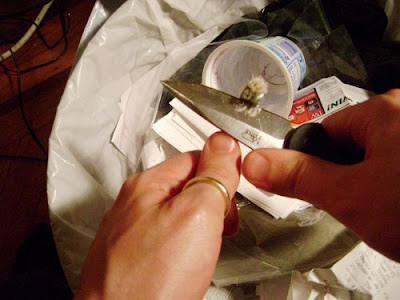 Then I cut half of the row off, leaving four columns of bristles. Then I trim off the top of the toothbrush to make dipping easier.

If you use a brush with wavy, uneven bristles, you might find that those make it way harder to smoothly thumb the brush later on. A generic, flat brush works best for this purpose. 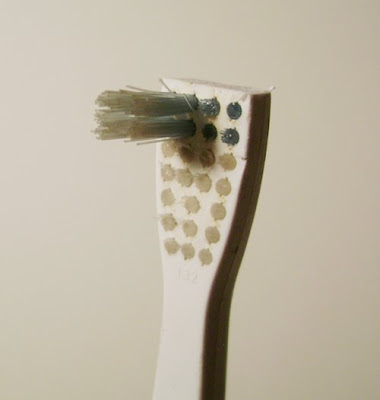 Now you just dip the bristles in ink, aim the brush in the direction you want the splatter drops to face (aiming straight down for round, even drops) and pull your thumb across the bristles as if you were running it along a deck of cards.

Here are a few suggested uses for splatter: 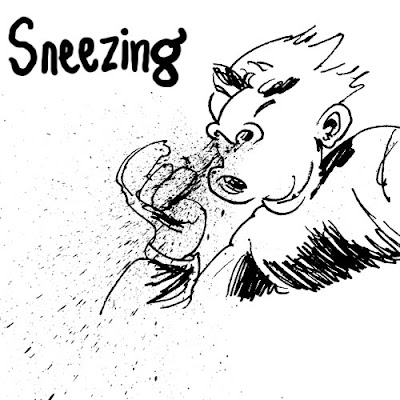 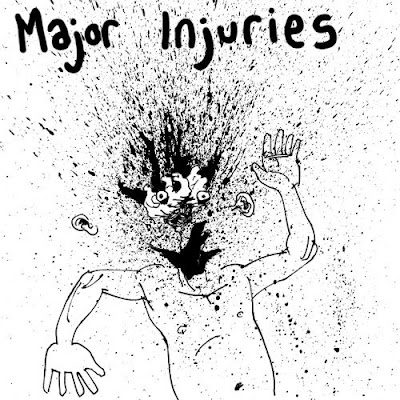 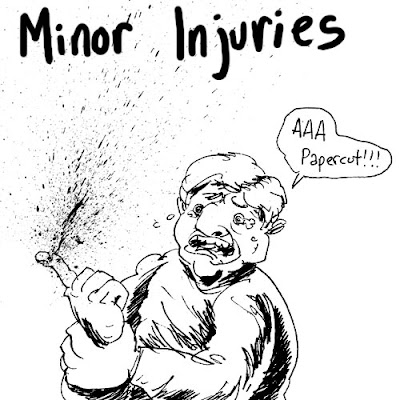 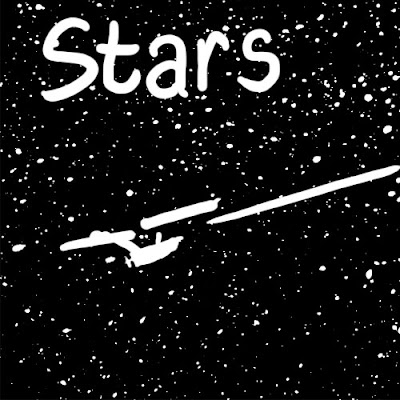 As this week's title suggests, I'm not actually that huge a fan of using speckly shit. It has it's place, but just like the gradient tool in Photoshop, it's overused and more often that not tastelessly used. I think it's often a substitute for drawing for people who can't be bothered to actually draw spattering or textures. Plus, I hate how dirty it gets my hand: 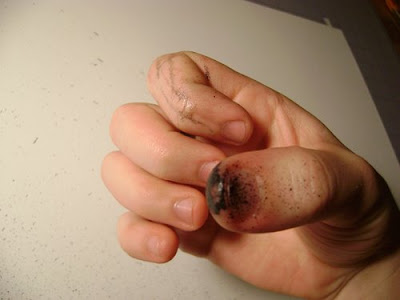 Next week: Lettering Nibs
Posted by Comic Tools at 1:50 AM

Just a suggestion, but is there any way you could also put the title of your posts into the title field, so they show up as something other than (title unknown) in the RSS feed?

Annoyingly, this particular blog template lacks a title field. I'll eventually mess with the design and layout of the blog, but I lack the time right now.

I'm trying to think of some examples of some really well drawn speckly shit to further argue against using the toothbrush filter...

Becky is one of those people who's the exception to just about every single rule. She almost has a supernatural knack for turning what should be tacky looking things like MS Paint or speckles or thumbprints or whatever and making them amazing, almost celebrating them.

Indeed. And to add oil to that fire, a great example of when the toothbrush filter could have been used and wasn't to far greater effect:

What is this toothbrush filter people keep mentioning? I've never heard of it.

Oh sorry I just meant using a toothbrush to make speckles. To me it's kind of like using a filter in photoshop- a bit of a cheap trick that's difficult to use well...

cool, i always wondered how this was done. i'm going to go chop up a toothbrush now.

kudos on the excellent blog, i've learned a lot!