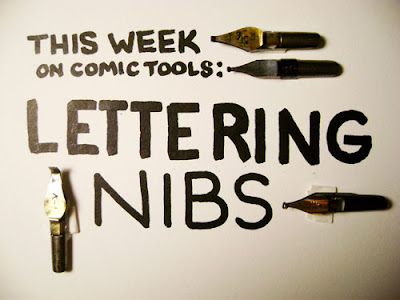 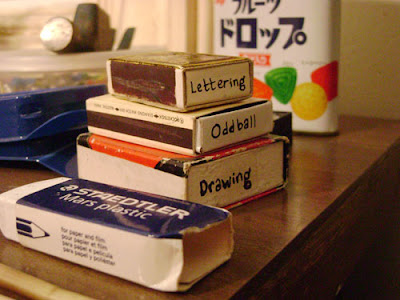 There was a period of a few years where I was really obsessed with achieving lettering like you see in old Sears and Robuck catalogues. One of the principal tools used to achieve solid block lettering was the lettering nib. 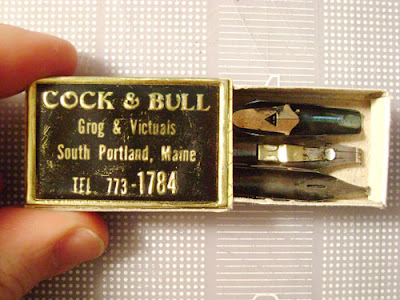 A lettering nib is a fixed-width (no flex) nib made for laying a lot of ink down in a specific shape. The tip of a lettering nib is a large shape of varying size that can be round or squared off, and when you draw with it you press the whole surface of the tip to the paper. Lettering nibs all have an extra piece of metal that fits over the nib to hold a huge bead of ink to feed the surface area of that enormous tip. 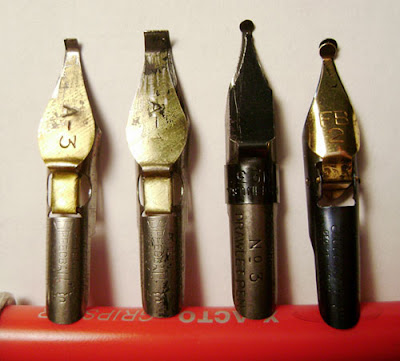 Here's 3 different designs of ink resevoir, seen from the side: 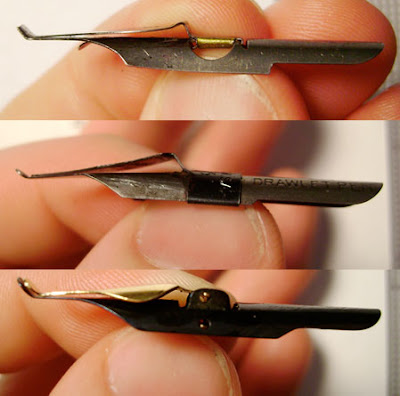 Lettering nibs are VERY easy to use, and much more forgiving to draw with than a normal nib. Because of the wide, inflexible tip, you can move slowly and deliberately and not get a wobbly line like you would slowing down with a flexible nib. In fact, there's only one trick to drawing with a lettering nib:

To get really crisp, invisible seams on the corners of your letters, latch the shape of the tip up to the line, and then draw. Perfect corners every time. 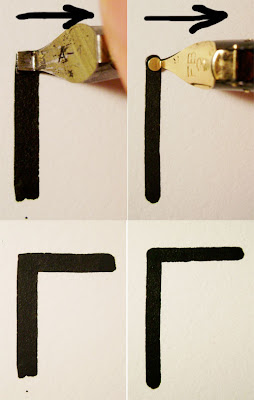 If you get really good at this the lines look so clean they almost don't look like they were made by human hands. Or you can use the nib less carefully for lines that look neat yet have personality.


Make sure you always clean your lettering nibs after every use, because they can clog and lose function if you allow buildup. Make sure to wipe UNDERNEATH that extra piece of metal. Really get in there and floss the ink out. 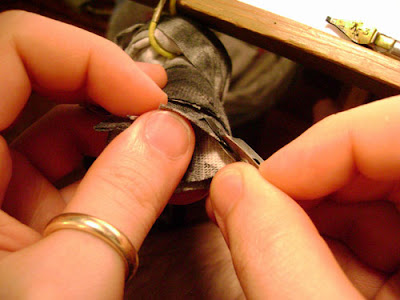 My friend Hilary recently have me some lettering nibs with this fantastic latch design that lets the nib pop wide open for easy cleaning. You'd think this design would be flimsy, but it's actually quite tight and robust. 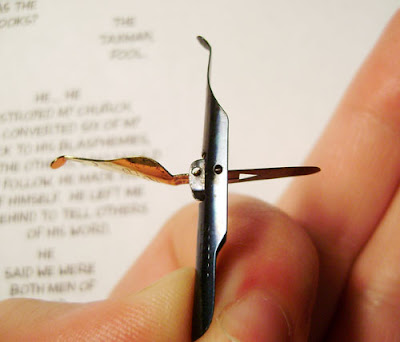 Next week on Comic Tools: Things you should read
Posted by Comic Tools at 1:33 AM

I used to do my lettering by hand but at a certain point I admitted to myself that I sucked at it (i.e. had no desire to pursue getting better) and just started getting them from Blambot. His comic fonts are really nice.

I took your advice and ordered a bunch of brushes from Rosemary (SO many); they haven't come in yet but they look beautiful! I'm particularly excited about trying the extended point (series 46). I use riggers constantly but I'm always having to go back for more ink. This brush apparently holds much more ink so i don't have to dip so often.

I too love this blog - long may it continue.

Computer fonts are so tempting, and Blambot's are so good, but there's just something indefinably better about hand-lettering, no matter how "inhumanly well" it's done!

I tried using Digital Strip for spacing and then tracing over it with a nib, but it was more trouble than it was worth. Guess like anything there's no short-cut to being proficient letterer...

Sarah: SO glad you're giving Rosemary business. Can you tell me, what do you use riggers for? What do you like about them versus normal brushes? And would you be willing to review the 46 when you get it?

Bobby: Learning to letter well totally sucks, but knowing how to do it is totally awesome. You'll use computer fonts better too, because you'll have a deeper sense of how spacing works. Fonts aren't intended to be used as-is, after all. It's assumed that the person using the font will be tweaking the spacing to make things fit and look better word by word and line by line, just like graphic designers do with even the most expensive of fonts.

I would be more than happy to review the brushes; they look fantastic. Up to this point, I've been using Princeton (series 4050) which are more expensive and W&N Cotmans which are cheap but reliable. I also bought a couple other interesting brushes from Rosemary: the kolinsky comber (series 331), the golden synthetic spiky comber (series 2230) and the squirrel tinter (series 43). Outside of that, I just bought a bunch of kolinsky 2 and 3 rounds (series 33). Just let me know which ones you want me to go over.

Riggers are great because the long fibers are very forgiving, allowing you to lay down a straighter, finer line. This is because the flexibility of the tip allows it to keep contact with the paper even if you make an unexpected move with your hand. I mainly use them for dialogue bubbles and frames but good in any situation where you need to paint a long curve or line and you don't trust the stability of your hand. Conversely, it's really good for less controlled motions, like creating bare trees, in which case you hold the brush much higher up. It's really fun just to flip it around on the paper.

Ha ha... when I first started drawing comics with a nib pen I posted on my blog with a drawing of the very same lettering nib you have here with the question: "Does anybody know what this is used for?"

There is a Speedball pamphlet on lettering that, besides being beautiful, has a lot of useful hints on how to use these nibs, and which stroke should come first, second and third when writing a letter.

One of the best pieces of advice I ever received on lettering was to make the points in A or V extend slightly past the guide lines (i.e. your A is a little higher than your T). Otherwise they look tiny.

Sabin, could you maybe scan that pamphlet and send it to me?

Love this blog! Great work. I can't believe how many things I've been doing wrong over the years!

Thanks Anton! If I may ask, what, specifically, have you picked up? Anything you'd like to request?

The comments on this topic are interesting. It seems a lot of people are talking about "lettering" as in "lettering the dialogue in my comic book". I had hoped that lettering nibs were the way to go for this, but it seems to me that even the relatively small sized models (like the B-6) lay down lines way too thick to be used to letter your actual dialogue balloons.

I ordered a bunch of lettering nibs (including the flip-latch one) and found them to not be useful for that kind of lettering.

They do, however, hold so much ink and go forever, it's amazing.

So I think these will be good for titles and sound effects and any case where you need a good thick line. But I will need to look for another tool to ink my dialogue with.

Anybody have thoughts on this? Disputes?