This week: I love my new ink bottle 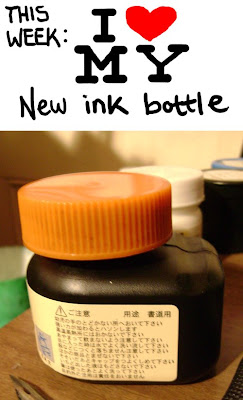 No, Comic Tools isn't dormant again, and the posting schedule isn't changing, I just had lots going on and took an unannounced 2 week vacation.

During the first week Ma Fille visited me from out of state and while she was here, she bought me this lovely sumi ink bottle at Kinokuniya. Here's a good shot of the label, which is entirely in Japanese: 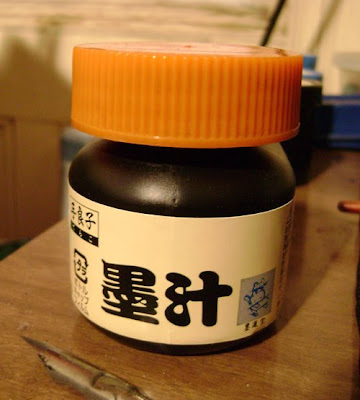 I didn't want the bottle for the ink, which I transferred into a bottle of totally useless and crappy fountain pen ink I've had lying around since I lived in Maine, but rather for the bottle itself. As anybody who's inked much knows, bottles are a royal pain in the ass.

Most ink bottles come thin necked and wide-bodied like this: 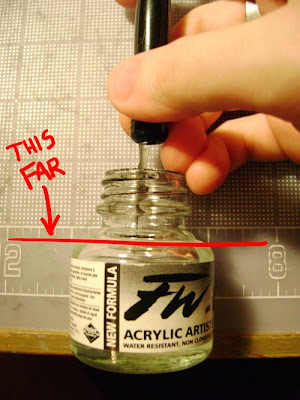 The result is you can only comfortably get your nib or brush in so far before you start accidentally getting ink from the edge on the tool and your fingers if you're not careful, and it can be very hard to see where the ink level is to avoid over dipping the brush.

This is actually a much fatter bottle than the ink I currently use. I don't have any fresh bottles of what I use now lying around, but here's their dropper caps, which will show you just how much smaller the bottles for my current ink are. I can barely fit my nib holder through the top of the bottle. 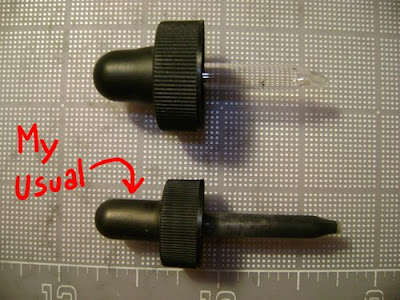 I tried solving the problem by using old film strip canisters as ink containers. It sort of worked- as you can see you can really reach the nib in their easy with no mess on yourself because of how wide and shallow they are: 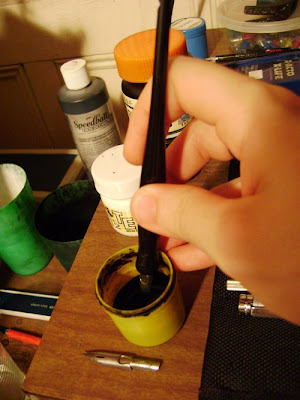 But unlike a good ink bottle they didn't seal watertight and any little jostle would fuse the lid to the canister with solid ink: 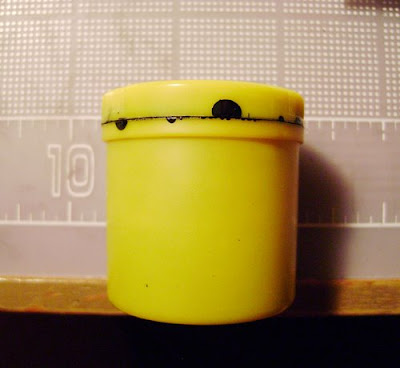 Even worse they, allowed evaporation over time. Here's about four bucks worth of ink reduced to an eighth of an inch veneer that will never come off or be fully reconstituted the way it was ever again: 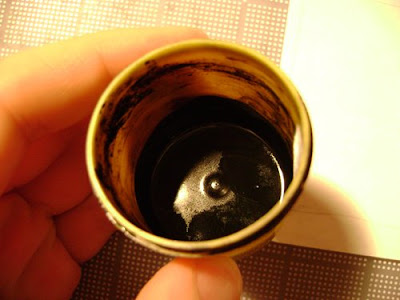 Which is why I got so excited about this sumi ink bottle. First of all, it's huge, which means you can put a lot of ink in. It's got a stable, wide bottom. It's got a wide mouth, and it even has a nifty brush holder groove: 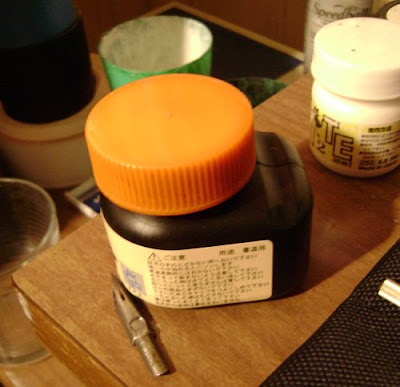 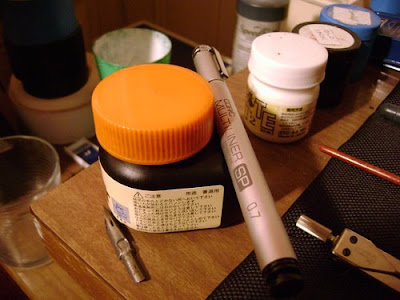 That groove looks more for show than action but I tell you, it's very stable. It actually works. And the best part? It has a cap that seals air and water tight: 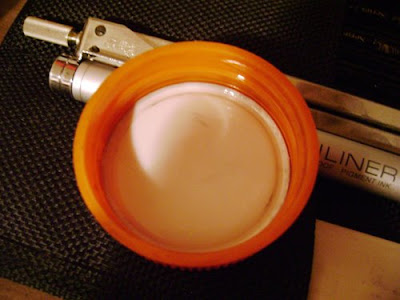 Never ever ever take the styrofoam out of a bottle like that by the way, or you'll take away it's ability to seal.

This is the bottle open. Two things to notice here: see how they made the neck ridge low and prominent so you could wipe the excess of the brush without gunking up the top edge? And notice how even the thin film of ink on top of that ridge, away from all the other ink, is WET? That's how little moisture this bottle lets out- no dry ink forms inside. 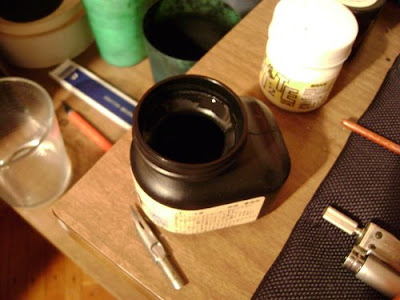 I am so psyched to have this thing.

Also, Timothy Dempsey asked me to link him here, so here I am, doing that. Here is his blog where he posts things that he did. Perhaps you might like to have a look.
Posted by Comic Tools at 1:39 AM

Wow, this does look like a great inking bottle. You wouldn't happen to know if it's available online, would you?

I can certainly identify with all the frustrations you mention.

I can't find it online, but that may be because I'm using English characters to search for what's probably a totally Japanese product. I bought it at Kinokuniya, and they seemed to have a lot in stock. Kinokuniya has several locations within the US, at least, but even traveling to one of those might be a hell of a ways to go for many. If anyone reading this can read Japanese and search for it, that would be helpful.

Got mine at the Kinokuniya Stationery And Gift store in Pacific Heights, Japantown
1581 Webster Street
Suite 218
San Francisco, CA 94101
(415) 567-8901
Other than traveling to one of the actual stores, it might be more efficient to contact them by phone to see how much would it be to have one shipped your way.

For those having difficulty finding this one, I just use a dropper to squeeze ink into a little ceramic inkwell, which makes the perfect depth and alleviates the danger of over-dipping and ruining the brush.

I got a nice little handmade one from Wills Quills in Sydney, Australia... the image is here: http://www.willsquills.com.au/Images/CalligraphyWritingAccessories_files/CeramicWhiteInkPots.jpg

I got a chunk of wood and drilled a hole where it sits, so it doesn't get knocked over.

That's a beautifully designed bottle ... but this post kinda reminds me of that scene in WALL-E (I know, all together now, "Awwwww ....") where WALL-E finds a box with a diamond ring in it, tosses the ring & keeps the cool box. No criticism here - I enjoy a well crafted container as much as anyone. I just find myself wondering if the stuff inside was any good? When it comes to drawing with a brush, good sumi ink is wild stuff.

It's great sumi ink, and I'm sure I'll find some kind of use for it someday, or maybe I'll eventually just give it to someone, but since Sumi ink isn't waterproof it's pretty much useless to me.

Another nice ink bottle comes with "Pen & Ink" sketch ink (comes with the Pen & Ink sketch Fountain Pen.) I don't really like the ink but the bottle is nice. There is a removable plastic insert that fits into the mouth of the bottle. It keeps you from dipping a nib or brush too far into the ink. You refill the insert by recapping the bottle and inverting the bottle. That may be a hassle to some; but I have found, I don't mind.

I just bought an old glass inkwell on ebay in attempts to solve this problem (among others). I personally only want a small amount of ink out at a given time, as I have already felt the burn of spilling a full bottle of ink onto the carpet.

I'll let y'all know how it goes when I receive it.

Older bottles of Sheaffer 'Skrip' fountain pen ink have a clever little built in inkwell near the lip. These can be bought for next to nix.

I never wanted to ink using the bottle because I could not see how much ink was being loaded onto the nib/brush. I also wanted to avoid spilling the inking onto my pages. Here is an alternative to your method.

1. Find a small but heavy magnet. You have one in that radio that no longer works.

3. Open one bottle and set aside.

4. Place beer cap on magnet and fill with good ink.

5. Drink the beer from eariler to celebrate will inking!

You can see mine in this vid:
http://www.youtube.com/watch?v=hhzj3wlDTFg

Say, I put some of this ink on a piece of paper, let it dry, then ran it under my tap for a while. Seems waterproof to me. It's also black as sin and thin enough it won't tear up my brush. The bottle's great, but I think you short-changed the ink.