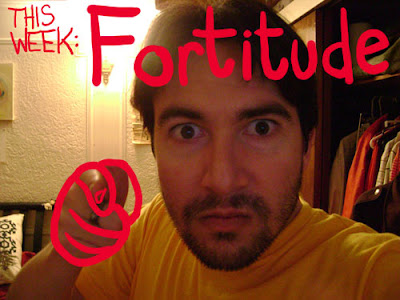 This is where you live now. 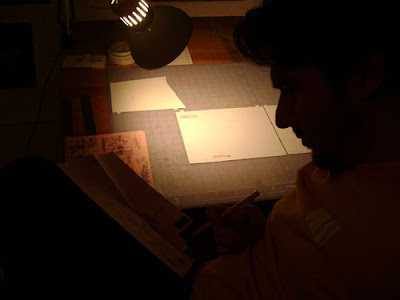 A two page spread of the thumbnails I'm working on. After roughing in a figure I liked alot, I realized I'd not left enough room to the right for the other characters. 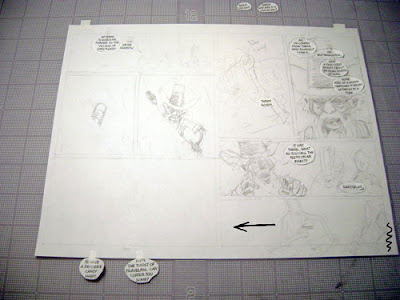 Tracing is great for saving detailed work, but it's more trouble and time than it's worth for roughs. So instead, I leave a ghost of the previous image when I erase, so I have it there to refer to when I re-draw it. 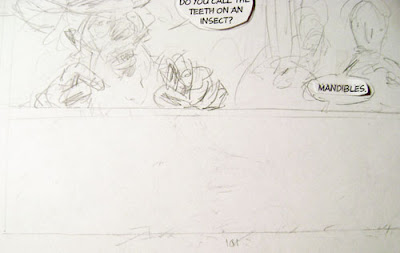 Here's the re-drawn panel. The space feels more real, nothing is cramped, I didn't lose my pose from before, and I feel good lust looking at the page. And the best part is, even though it took me several minutes to get that pose the first time, it took me less than a minute to draw it again, and do it right this time. Time well spent if you ask me. 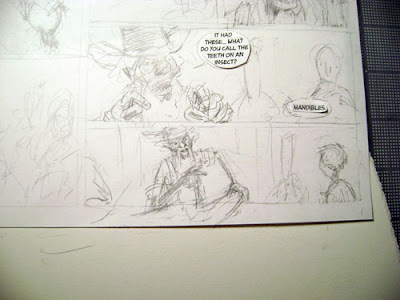 I use pre-printed word balloons so I know how much room the text will take up and what shape it will be, but sometimes I notice that I could have done a better job, so I utter a few curses and then cut it up and assemble it right. 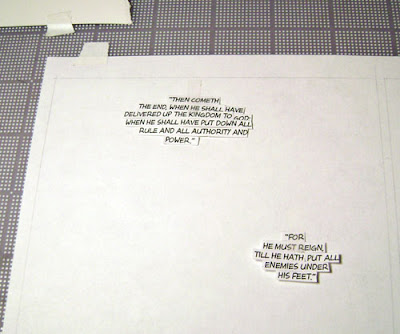 Most careers that involve doing something you love require that you adapt to some harsh conditions that most people would consider too much to handle. Cooks have to adapt to standing long hours and heat. Standup comics have to overcome fear of judgement and public failure. I think the reason being able to do what you love is so rare is because the cost of doing it is so high.

In cartooning, that cost is in hours and toil. Cartoonists work longer than people probably suspect we do for much less pay than people probably think we get. There is no boundary between our work life and our personal life. Every moment you're not doing work, you're thinking about it, and more precisely, you're thinking about how you ought to be doing it. Days of your life will pass with no memories, no social interaction, nothing but you and the work. But a cartoonist's days leave behind pages, and the creation of these pages is worth trading our lives for, day by day.

The roughest times aren't the ones where you're grinding along, working insane hours, and kicking ass, though. It's the times where you have to work but you don't feel like it. This is when the lack of seperation between personal life and private life can really start to get on your nerves.

For the last week I've been cranking away to meet a deadline, working until five in the morning the last 3 nights, never going to bed before four. I also developed a sinus infection earlier this week, and every morning until today I woke up and immediately started hacking up blood and infection. Want to wake up feeling lousy? Go to bed with the sun coming up and wake up coughing out what looks like a mashed beetle. And then work another 14 hour day. And the next day.

I feel good about the work I'm doing, but I'm not working this hard because I want to, I'm doing it because I have to. The way I stay balanced is by making sure that nothing leaves my table that I'm ashamed of. But it's SO hard not to get lazy. It's so hard, when you're ready to move on to the next page, and you see that a panel could be re-shot from another angle to be a little better. It's so hard not to say "It's good enough, no one will care," and move on to an earlier bedtime.

Nest week really will be about Printed Lettering Guides.
Posted by Comic Tools at 6:35 PM

Oh, so much clap clap for those last SIX paragraphs Matt!

Man, that stuff never eases up! Cartooning, you can't just push a button, and print out the damn thing. No dropping out of the office at five, argh!

Jillian Tamaki said it well on her Blog, something like: "Everybody thinks it must be a nice job drawing for money." Sure, it's better than working the coal mine.

Hell, you don't sell a busted up drawing - and those happen.
I'm on an equal roll right now, also for much of the last months. Occansional sickness included.

I can be wrong with this, but I think one of the things that makes drawing house style easier to access, is that you start off and keep doing it with a grid of rules layed over the story.

"Take this perspective, plus that expression, ink it that way. That's how we do it." Sure it's still a load of work, but some of the thinking goes into directions that have already been paved very broadly.

I don't want to forget to say: I love those lines!